Capturing the essence of what the raging Covid-19 pandemic has brought upon the world is no mean feat.

Capturing the essence of what the raging Covid-19 pandemic has brought upon the world is no mean feat. The colossal nature of the subject is enough to bog one down. However, a group of film enthusiasts from the state capital has come close. Their short film titled ‘Co War’ adequately depicts the Covid-19 situation through powerful visuals.

The film, shot by director Ratheesh Kumar R conveys the intended message on the pandemic effortlessly using minimal resources. Ever since its release on YouTube last week, the film has garnered an overwhelming response, hitting 50,000 views within 48 hours.“We wanted to do something different on Covid-19. The film is intended to tell the world that there is a wall of safety between humanity and the coronavirus and it is us who have to decide whether to break the wall or not. We are happy with the response,” said Ratheesh who also conceptualised the film. 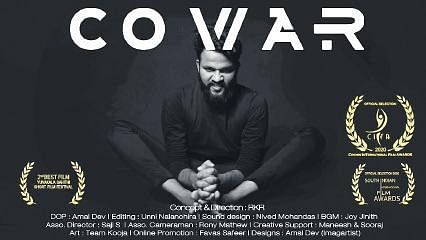 ‘Co War’ recently bagged the second spot in the short film category at Yuvakalasahithi Fest. “A lot of films were released during the lockdown with similar a thread hence it was a very challenging task to make our content unique. All of us in the crew are friends. Those behind the camera are wedding videographers but we all share the same dream which is cinema. Chemmeen, our YouTube channel was launched around five years back. We aim to come up with different concepts and content which are appealing for the public,” said Ratheesh.Shot with limited number of cast and crew, the film was made with a budget of just `3,000.

“It took over two weeks to shoot. The only money we spent was on waste paper which we used to make the set. We shot the film in two settings -- black and white -- to depict the pandemic and human suffering caused by it. The shoot was scheduled when the district was under triple lockdown so we faced a few challenges. The production happened at a friend’s place which was lying unused,” said Ratheesh, who is the award-winning director of the short film ‘Kooja’.

Now we are on Telegram too. Follow us for updates
TAGS
coronavirus Co War