Asif Ali’s upcoming Maheshum Maruthiyum will be rolling next month. 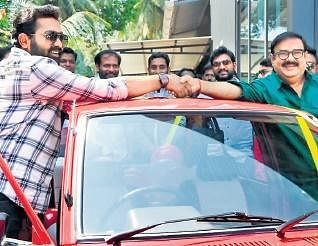 Asif Ali’s upcoming Maheshum Maruthiyum will be rolling next month. The Sethu directorial is bankrolled by Maniyanpilla Raju Productions in association with VSL Film House. Maheshum Maruthiyum is touted as a romantic comedy featuring a man, the first Maruti 800 model, and a woman. Since the car is an integral part of the story and has a bond with the main character, the makers will be using a restored 1983 Maruti 800.

The pictures of Asif with the car are out online. The film’s female lead is yet to be announced. Asif recently completed shooting for Rajeev Ravi’s Kuttavum Shikshayum and Sibi Malayil’s Kothu. The actor is also awaiting the release of RJ Mathukutty’s directorial debut Kunjeldho.

Now we are on Telegram too. Follow us for updates
TAGS
Asif Ali Sethu directorial