‘Kaakkikkullile kalakaran’ is a popular phrase that addresses creative cops. M R Madhu Babu, an officer in the rank of DySP who works in the crime branch is well-deserving of the title

KOCHI: Actor Sathyan, KPAC Azeez, Bheeman Raghu and Abu Salim  all these golden names in the Malayalam industry have one thing in common, they are all policemen who made it to the big screen. Heroes, anti-heroes or comedy actors, always play their part responsibly as they do in real life. The latest addition to this list is 45-year-old M R Madhu Babu, an officer in the rank of DySP in Kerala Police.

Madhu, who is presently posted at the Kottayam Crime Branch unit, played a major role in the Malayalam film ‘Velukkakka Oppu Ka’ featuring national award-winning actor Indrans as the lead actor.
“Beginners like me are usually charted in for small roles. But I was lucky enough to get an important role, where I portray a school teacher,” says Madhu Babu. 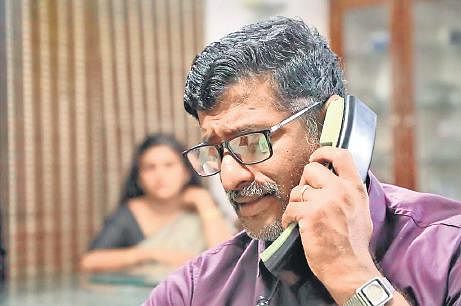 The movie is the maiden directorial venture of Ashok R Klatha a social drama where Indrans plays a 78-year-old man who attends for literacy classes and learns Malayalam alphabets till ‘Ka’ to be able to put his signature. It further delves into the pain of a man who takes a lot of strain to raise his children. Though Madhu had an intense passion for acting and was active in discussions about movies and dramas during his college days at SD College in Alappuzha, he never got an opportunity to work on a film project until now.

Madhu was exceptionally thrilled to play the role as he wanted to become a teacher after he did his post-graduation in English literature and Bachelor of Education course. “But I got an SI selection, so I decided to pursue the job of a police officer. Life became stressful and tense on the job. I would meet a few friends in the film industry to unwind — we would discuss movies and dramas.

It was on one such occasion that my friend and director Ashok suggested that I act in the film. I couldn’t say no,” Madhu says, adding that though he loves to act, he hasn’t decided to take up acting as a full-time profession.

“I am a police officer with a lot of responsibilities. If any new assignment comes up, I have to discuss it with my family and my seniors before committing to it,” says Madhu, who hails from Pathanamthitta. “My wife Manju is a high school teacher and my daughter Bhoomika is in nine. They do not want me to take up acting as a profession while I am in service,” Madhu quips.