The director fails to highlight the crux of the story; his ideas of filling the film with glam and double-meaning dialogues only end up testing viewers’ patience.

With his experience of handling documentaries, director Tejesh Kumar believed that he had a script that would showcase his mastery over conveying important issues. But, Rangada Hudugaru definitely fails in the attempt. Nothing in the film conveys the message he tries to — that of not trusting strangers. 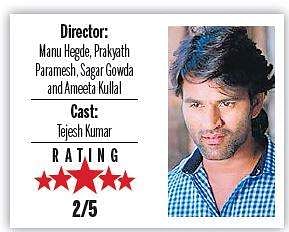 The film tries to bring the message out with three free-spirited youth, who accidentally meet a girl, and fall in love with. They do their best to catch her attention, which makes most of the story. Then comes Shivaji Reddy, whom the trio meet after getting involved in a minor car accident. For some reason, there’s an instant connect. And then comes the shock. The three realise that the guy is a terrorist. Will the three prove their innocence? How will the police manage to nab the culprit?

Going by the film’s narration, the core theme becomes a part of the story, which is told in the last 15 minutes. Otherwise, Rangada Hudugaru is about the three boys and the girl. The director fails to highlight the crux of the story; his ideas of filling the film with glam and double-meaning dialogues only end up testing viewers’ patience.

Manu Hegde, Prakyath Paramesh and Sagar Gowda seem amateurish. And Ameeta Kullal is just a glam doll. The music by Senapathi is average and so is the cinematography. This is a lesson for filmmakers, who should realise the importance of not deviating from the core theme.

Stay up to date on all the latest Entertainment Review news with The New Indian Express App. Download now
TAGS
Rangada Hudugaru