The Kargil war scenes, the saving grace of this film, unfortunately don’t come till the second half, and even then, the scenes are diluted by the focus on the romance.

Rating: One and a half stars

Director Arjun is mostly overshadowed by his image as Action King, and though he has directed some excellent masala actioners such as Ezhumalai, the last time he toned things down and made a romantic film was back in 2001 with Vedham. And now, 17 years later, he is back to showcase his sensitive side with Sollividava, a bilingual he’s supposedly made for his daughter, Aishwarya. The film has her paired opposite Kannada actor Chandan Kumar, who is making his debut in Tamil cinema. 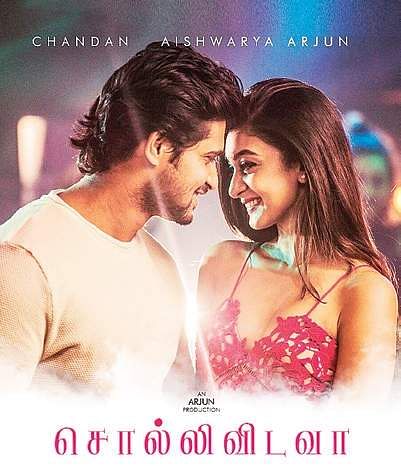 Though the film was launched two years back, Sollividava feels like a film that has hit the screens a decade too late. Arjun has weaved a pretty straightforward and simple love story, and with his well-known patriotic leanings, has used the Kargil war as the backdrop for this story that unfolds in 1999.

Chandan, as Sanjay, makes a decent entry to Tamil cinema, and especially shines in the action sequences; a parkour chase in the first half is particularly impressive. Arjun’s trademark punches are hard to miss, and the fact that Sanjay wears an open jacket in every fight scene makes the similarities seem almost eerie. Aishwarya, as Madhu, excels in the dance department and in delivering lengthy dialogues, but her acting lacks finesse. It’s particularly exposed in the close-ups. On occasion, her Tamil dialogues too seem to come out after a struggle.

The love track is riddled with clichés. The lead characters being at loggerheads before falling for each other, for one. The supporting characters don’t get much to do despite boasting of some established performers like Suhasini and Vishwanath. Even Yogi Babu, who has been on a successful streak, hasn’t been used well. Rajendran and Sathish too fail miserably to elicit laughs. Sathish even compares Sanjay to Mudhalvan Arjun in one scene, and this scene technically happens before the start of Kargil i.e., May 1999, even though Mudhalvan released only in November that year. But such trivial mistakes is the least of Sollividava’s problems.

The Kargil war scenes, the saving grace of this film, unfortunately don’t come till the second half, and even then, the scenes are diluted by the focus on the romance. The first half that establishes the characters, is tedious, and on occasion, even unintendedly funny — like the scene in which an industrialist is shown to feed sugar to ants but later, sends his mother to an old-age home. The songs too don’t make a mark and given that the music is by Jassie Gift of Lajjavathiye fame, it is rather disappointing.

The mini-twist, at the end, doesn’t do much to save this mediocre film. On the whole, it’s just a run-of-the-mill romantic film which has almost no redeeming factors.

More from Entertainment Review.
Now we are on Telegram too. Follow us for updates
TAGS
Arjun Sarja Aishwarya Arjun Sollividava