We are promised a battle of wits between Sonu and Sweety... and in the end, it all comes down to only one thing - Sweety is a problem because Sweety is a woman.

In Luv Ranjan’s mouthful Sonu Ke Titu Ki Sweety, two grown up men, best friends since school, live together as roommates but take pride in the fact that one of their mothers visits them on a weekly basis to clean the toilet.

They belong to families that choose destination wedding because it is cheaper (I’d really like to hear the math on this) and say no to dowry because it is the modern thing to do, not just the right thing to do. They travel only in BMWs and Audis, and throw stacks of notes at each other during weddings. Of course, they live in Delhi and party in Gurgaon.

You may ask what’s new and point out that the Karan Johars of the world have made a laundry list of movies featuring these families. But there is an unspecified malice that hovers around films like Luv Ranjan’s while the likes of Johar only want to focus on the saccharine.

The arrogance is stripped off in aid of the apparent goodness and purity - whatever is left of it - to shine through. Johar’s films’ protagonists may also be oppressors, often of the tacit kind, but in Ranjan’s films, the oppression is worn like a badge of honour and paraded around. The wealth signalling and moral vacuity on show here is almost offensive.

Therefore, your tolerance or your ability to be entertained by this mess depends completely on the amount of patience you have to digest this array of characters living their life in a universe of their own. 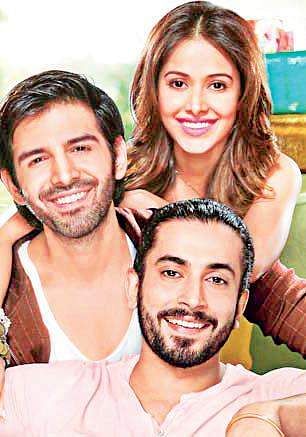 Sonu (Kartik Aaryan) and Titu (Sunny Singh) are best friends from school, almost family, so much that Sonu refers to Titu’s mom as mummy. Among the two children who pretend to be grown-ups, Titu is the gullible one and Sonu the ever cynical saviour, out with the pitchforks every time Titu has a problem with women.

Which is all the time. Ranjan’s film deals with the biggest one, when Titu goes for arranged marriage and gets engaged to Sweety (Nushrat Bharucha), who according to Sonu, is too good to be true. The biggest problem with Sonu Ki Titu Ki Sweety is probably the fact that it has no real conflict. We are never told what’s so evil about Sweety.

If Titu is so in love with Sweety, why does he need saving at all? What exactly is Sweety planning for the long term? We are promised a battle of wits between Sonu and Sweety, and this goes on for so long that 90 minutes of the film is essentially the trailer. In the end, it all comes down to only one thing - Sweety is a problem because Sweety is a woman.

Even this would have been fine if Ranjan had gone for some homoerotic chemistry between Sonu and Titu. What if Sonu cannot let go of Titu from his life? Now that’s a film we need. Or we need a spin-off with the patriarch - Ghasitaram (Alok Nath) with his friend Lalu (Virendra Saxena) - who at one point says, and I paraphrase, that he doesn’t care what happens to this family, let them all go to hell.

That sounds like a sweet idea for a sweet film.

Now we are on Telegram too. Follow us for updates
TAGS
Sonu Ke Titu Ki Sweety