'Mohini' movie review: The real horror is that a film like this got made

The story is a rehash of the old standard horror film plot — the ghost of a murdered woman takes possession of a living one to take avenge her murder — and it’s all very predictable. 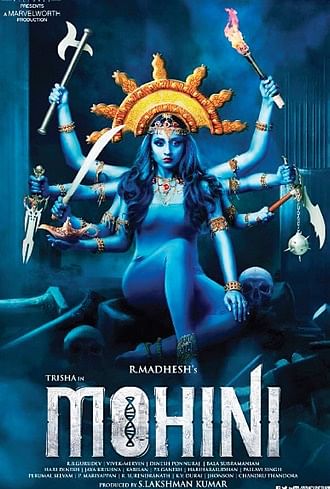 The poster of Mohini.

We get a lot of bad Tamil films, week in, week out. A commonly cited excuse for this is the lack of budget. That’s clearly not the case with Mohini — Trisha’s kind-of, sort-of comeback film after 2016’s Kodi — whose makers had budget enough to shoot most of the film in London and to allegedly hire the VFX team that worked on the Harry Potter films. And yet, this horror-comedy is neither scary nor funny; just plain bad. The story is a rehash of the old standard horror film plot — the ghost of a murdered woman takes possession of a living one to take avenge her murder — and it’s all very predictable.

Sure, there’s the inclusion of catchphrases like epigenetics to explain why the ghost chooses a look-alike (never mind that the explanation hardly makes sense), but it really doesn’t matter in the larger scheme of things. Trisha plays the dual roles of Mohini (the dead woman) and Vaishnavi (the one possessed). Her idea of characterisation for the two roles seems to be: Vaishnavi — soft and smiling, Mohini — scowl and growl. And growl she does, a fair amount. But rather than making her seem menacing, it just comes off as ridiculous. Each time she said, “Naan Vaishnavi illa, Mohini!” it made me giggle. The third time, I simply burst out laughing. Jackky Bhagnani plays Vaishnavi’s love interest, who naturally ends up getting attacked by Mohini. Throughout the entire first half of the film, he has basically just one expression on his face — a silly grin. The romance portions between him and Trisha are positively cringeworthy.

Despite a lot of on-the-nose foreshadowing about the impending possession (I lost count of the number of times we’re shown the skeleton of the dead woman at the bottom of the Thames and the number of VFX shots of the river churning), the film takes what seems like forever to get to the actual event. Aside from this foreshadowing, the runtime up until then is filled with what I assume is meant to be comedy. However, the biggest laughs end up being elicited by the scary bits, which says something about the quality of filmmaking on display here. I’m generally not a fan of lazy jump scares, but I would have welcomed some in this film if only to stave off the boredom. Instead, I had to make do with spotting scenes which have dialogues that the characters seem to be uttering without opening their mouths — a product, I assume, of the director adding extra lines of dialogue during dubbing but not wanting to take the trouble of re-shooting the scenes.

The second half of the film seems marginally more tolerable once the backstory comes in, which, though not particularly well-done, is thankfully played straight without any attempt at comedy. It’s about how Mohini thwarts the villain’s child-trafficking operations leading him to kill her. But even here, the reason given for the villain buying kids is rather ridiculous — he wants to use them as human sacrifices at his building sites! The director seems to know how far-fetched this seems, given he includes a scene of an ‘expert’ being interviewed on television about the history of the practice and how it’s still prevalent. Really though, he needn’t have bothered. It’s the least of this film’s issues. He would’ve done far better to work on that interminable climax instead. Oh, well. There’s very little that redeems this tremendous bore of a film. I can only wonder what possessed someone to make it.

Now we are on Telegram too. Follow us for updates
TAGS
Mohini Trisha Mohini review Jackky Bhagnani Yogi Babu

A superb Mark Rylance delivers multiple twists in the crime drama, The Outfit

Nikamma: A lazy, cheesy film about a slacker