This is the only time when this film shows us a glimpse of what makes Star Wars so much more than just another franchise in the minds of people. 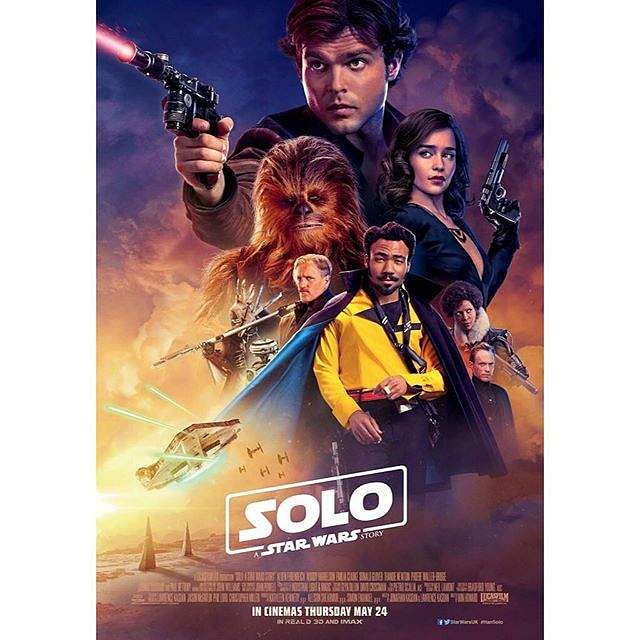 'Solo: A Star Wars Story,' which gets its US release on May 25, tells the coming-of-age tale of smuggler Han Solo before he was the galaxy's most adored scoundrel. IN PIC: The theatrical poster of the film. (Image Courtesy Instagram)

As George Lucas rolled out the prequel trilogy to show us the hows and whys of Anakin Skywalker becoming Darth Vader, he showed us the terrific world building skill of a filmmaker whose imagination knew no bounds. While doing this, he also filled us in on the backstories of every big character in the original trilogy. Except a certain Han Solo. And here we are in 2018, 40 years since Han Solo first answered the question of Obi Wan Kenobi with these iconic lines - "You’ve never heard of the Millennium Falcon? It’s the ship that made the Kessel run in less than 12 parsecs.”

Solo: A Star Wars Story is the film that tells us how Han Solo became Han Solo, the galaxy's most famous smuggler. The film originally was directed by Phil Lord and Christopher Miller, known for their humour both in animation (The Lego Movie) and in live action (21 Jump Street), but due to creative differences they stepped down and Ron Howard took over. Unfortunately, Solo comes across as a film that does not have the stamp of any of these amazing directors, and ends up being a patchwork of two distinct styles.

Han Solo, played by a young Harrison Ford, was the kind of smart, suave rogue, who has become a sort of template for a lot of modern action heroes with swag written all over them.

A lot of that character would seep into yet another iconic role that Ford would go on to play - Indiana Jones. So when Alden Ehrenreich comes on screen, you can't help but look for all the mannerisms that you have come to associate with Han Solo - the smirk, the wink and that smart motormouth of his. It is here that this film fails big time, because without an engaging story, we are left spending our time on the little details, like the excited face of a young Solo who first sees the Millenium Falcon enter light speed. The writers also fail an earnest Alden by giving one of the worst reasons for why the Solo name came to be affixed with Han (hint: he undertook a solo journey)

The story is about Han, who grows up in Correllia and his young love, Q'ira (Emilia Clarke), and how when they are separated, he promises to come back for her. He enrolls himself with the Imperial Naval Academy because he is 'going to be the best pilot in the galaxy' but gets chucked out of there only to join a heist gang. It is here that he meets up with Tobias Beckett (Woody Harrelson) and tries to rob a train transporting coaxium fuel alongside Tobias' ragtag gang. However things go south and they now have to do another heist for Dryden Vos (a thoroughly one dimensional Paul Bettany) to settle their score, and that forms the rest of the story.

Han and Chewbacca were the original Rocket and Groot. Everyone's favourite Wookie, and the bromance he shares with Han, are clearly the highlights of the film, alongside a star turn by the inimitable Donald Glover, who turns in a fantastic Lando Calrissian with a near perfect ode to Billy Dee Williams' characterisation. However, the scene-stealer is the charming L3-37, Lando's droid 'companion', despite the little screentime it gets.

Phoebe Waller-Bridge's motion captured performance champions droid independence and droid rights. This is the only time when this film shows us a glimpse of what makes Star Wars so much more than just another franchise in the minds of people - when it refers to the politics of our world in a thoroughly tongue-in-cheek manner.

There are a lot of easter eggs splattered throughout, but the biggest problem is that unlike Rogue One, where there was a real tension and investment in characters, or The Last Jedi, which rewrote everything we ever thought was safe and certain about the Star Wars Universe, Solo: A Star Wars Story treads neither of these paths.

Now we are on Telegram too. Follow us for updates
TAGS
Emilia Clarke Alden Ehrenreich Ron Howard Solo: A Star Wars Story

An effective and important look at excesses of power

'The Suicide Squad' review: DC gets its ensemble film right, this time