If you are an Indian woman, you know how this scene unravels. Soni maintains a stony silence while the gentleman continues his advances.

Soni begins with the eponymous lead (Geetika Vidya Ohylan) furiously pedalling a cycle. She has a ‘gentleman’ in close pursuit — one who finds whistles and catcalls appropriate ways to communicate with women. If you are an Indian woman, you know how this scene unravels. Soni maintains a stony silence while the gentleman continues his advances. After a point, she loses it and he retaliates with a version of ‘chalti kya’. Now, Soni absolutely loses it and beats him black and blue.

A horde of policemen storm the scene out of nowhere and break the scuffle. One cop hands Soni her police jacket, while the man is taken to a hospital (It is a decoy operation). However, Soni is reprimanded by her superior officer Kalpana (Saloni Batra) for not following protocol. The scene effectively sets the stage for what follows — an exhaustive, level-headed, and rounded look into the lives of two policewomen and the gender issues they face.

Geetika and Saloni deliver fantastic, nuanced performances that breathe life into Ivan’s sensitive writing. There is an air of resignation in their body language that significantly shows that these women not only understand their circumstances but have accepted them. With these women and their stories, Ivan smartly takes stock of many a gender stereotype. For example, Kalpana is constantly called ‘too soft’ by her husband (also a cop). This isn’t because she isn’t authoritative; it is how she exercises the power. There is muted dignity in how she handles other officers. She genuinely looks out for her subordinates, and as a result, earns the twin tags of ‘emotional’ and ‘naïve’. 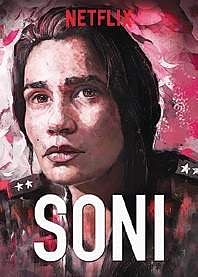 It reminded me of an old article about how women are expected to behave like men as they step into senior roles. Soni drives this point as well, but with a deft touch. The strength of the writing is that while it makes you empathise with the women, it doesn’t make a demon out of all men. It’s more about exposing the cultural conditioning that we are all subjected to.

On the other end, there’s the wiry and feisty Soni who conventionally would be called a tomboy. Ivan subverts a few stereotypes here too. As with Kalpana, there is dignity in her anger. She waits, warns, listens and then retaliates. The simmering anger hits hard. As Soni herself puts it, “They misbehaved, abused me verbally, and I’m the one who has to explain myself?” You see the unfairness of it all. Soni’s estranged husband says he felt he wasn’t necessary in her life. When he chooses to come back to talk to her about it, he says now he feels that she needs him. What changed, you might ask. The answer is a broken window. He says nobody would have dared to do this if he had lived with her. Somehow, the respect and fear a female police officer can’t seem to create, men seem confident of getting. But Soni doesn’t offer solutions; it just lets you ponder.

There’s a rare tale of sisterhood in Soni, not just between Kalpana and Soni, but also among the other women who have smaller roles in the film. Kalpana, the older of the two, is a constant source of support for Soni. There’s respect, admiration, empathy and above all non-judgemental concern. Unlike her husband, Kalpana doesn’t brush off Soni’s ‘aggression’ as a product of her unstable household. Soni admires Kalpana’s stability while the latter loosens up and starts to look beyond protocol. Amid stories that pit women against one other to horrifying effect, Soni is a breath of fresh air.

Set in the backdrop of Delhi, Soni has news announcements that talk about measures taken to ensure women safety in public places ­— separate taxis, buses etc. Soni again observes how faltu these measures are. There is a nice touch when Ivan places a news announcement that mentions a ‘dirty war’ in Kashmir. That’s not the only war this country is facing right now, and this is a film that once again reminds us of it.

'Yaara' review: A middling tale of brotherhood, bravado and betrayal