Sundeep Kishan tries too hard to be cool and gives his best since Venkatadri Express, carrying the emotional soul of the film with restrained performance.

Ninu Veedani Needanu Nene comes with a complicated back-story revolving around a newly-married couple, Arjun (Sundeep Kishan) and Madhavi (Anya Singh), and the film is packed with VFX-heavy sequences and extravagant display of emotions. Ever since its inception, Sundeep Kishan has been pitching this project as a multi-genre film that has rejected the tropes of satire and ghost-taking-revenge templates. Much in the same vein and unlike a raft of horror-thriller films which are usually set against abandoned mansions and isolated places, the conflict in Ninu Veedani Needanu Nene begins in a swanky house located in our busy neighbourhood, Kukatpally.

The thrill factor from the film comes from Sundeep and Anya’s characters, who make desperate attempts to find out the mysterious reflection of two different characters – Rishi (Vennela Kishore) and Diya – in a mirror. 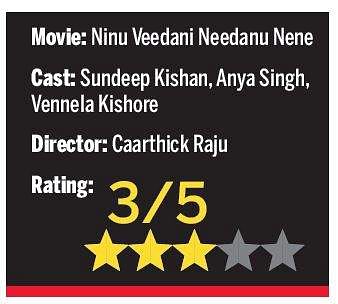 To be honest, it’s a supernatural thriller that tries to prove a point that it’s difficult to have scientific reasoning for some complicated stories that trigger human emotions. Director Caarthik Raju has effectively used the available resources to establish the characters and their relationships and has put an interesting spin on things in the first hour.

The second half has more problems in the narrative when its tone suddenly turns into a family drama with a few scenes stretched like the one during the climax where Sundeep visits his parents to console them. This hour is completely weighed down by lousy writing that comes with stories about characters suffering from grim conditions.

Although the director makes it a point to unfold the narrative from Arjun’s perspective, you hardly feel empathy for him. Here, he tried to infuse comedy featuring Posani Krishna Murali, Murli Sharma and a motley of characters which make things boring for the viewers to hold their excitement.

Typically, the film’s climax has emotional scenes involving elderly parents to drive home the point about desisting from negligent driving on the roads as it may cause havoc in their families. However, these portions seem obligatory to convey the family sentiment with a background song.

Sundeep Kishan tries too hard to be cool and gives his best since Venkatadri Express, carrying the emotional soul of the film with restrained performance. His scenes with Vennela Kishore are the film’s heartfelt ones. Vennela Kishore has a natural presence and he played his part without any inhibitions. He is easy to relate to and is likeable for his wisecracks. Anya Singh couldn’t prove herself as a competent actor and has to work a lot on her expressions. Poornima Bhagyaraj and Pragathi have rendered the emotional wallop to the tale with their brief appearances. PK Varma’s camera work and SS Thaman’s background score perfectly contributes to the texture of the film.

It’s quite a rarity to see a debut producer (Sundeep Kishan)’s intention to bring a different story in the days filled by commercial potboilers minting loads of money. For his sincere attempt, Ninu Veedani Needanu Nene deserves a one-time watch.