It’s always exciting to see a successful actor-director combination yet another time.

It’s always exciting to see a successful actor-director combination yet another time. Eight years ago, the stupendous success of Julayi gave birth to one such combination – actor Allu Arjun and director Trivikram Srinivas. Their subsequent film S/O Sathyamurthy too raised the bar and their combination made an explosive impact at the box-office. The industry and audience were equally enthusiastic to watch their third film, Ala Vaikunthapurramuloo, which released amidst high expectations on Sunday. 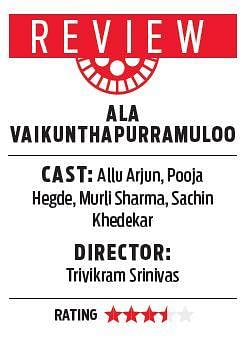 Written and directed by Trivikram Srinivas, the film focuses on three father-son relationships – Bantu (Allu Arjun) and Valmiki (Murli Sharma); Ramachandra (Jayaram) and Raj Manohar (Sushanth), and Appala Naidu (Samuthirakani) and Paidithalli (Govind Padmasoorya). Valmiki always tries to suppress Bantu and thinks that the family you are born into determines your fate. Ramachandra wants his son to be successful and doesn’t like to see him being laidback. Appala Naidu likes to give his son whatever he wishes for and doesn’t hesitate to kill if someone prevents him from doing so. Watch this film to know how these characters and their attitudes converge at a point.

Trivikram’s hold on the script is evident from the first frame as he moves from one sequence to another swiftly. There is opulence and poetry in every frame of the film, and he applies the same lavish approach to present it interestingly. The sequence that showcases how Raj on one hand and Bantu and his boss, Amulya (Pooja Hegde) on the other deal with their business opponents has been conceived well. This sequence clearly communicates the thought process of Ramachandra as well.

ALSO READ | Yet to get 'great' Bollywood offers: Allu Arjun

Like his previous outings, the hallmark of this film is an undercurrent of emotions and Trivikram skillfully depicts the conflict and bonding in an urban setting. His prose, brimming with exuberance gets an emotive and impressive expression by Allu Arjun. The scene where he discovers the truth behind his birth and the ensuing confrontation with Valmiki is one of the best moments in the film. Also, his resolve to help Ramachandra’s emotionally detached family seems strong enough to make us empathise with his character. It’s difficult to envision any other actor enacting the role of Bantu. As the story takes off, we don’t see Arjun – the star, you only see Bantu and that is one of the biggest plus of the film. The emotional moments are punctuated seamlessly into the narrative and the drama is engrossing more towards the climax when a key character resolves the conflict. Although the narrative follows the blueprint of family dramas, the story offers interesting twists and punch dialogues that come at regular intervals.

However, the film is not without its blemishes. While Trivikram, generally, may have a progressive opinion when it comes to portraying women characters, the same can’t be said about Bantu’s voyeuristic obtuse gaze at Amulya’s legs. Samuthirakani and Govind’s track seem half-baked. There’s comedy, a little bit of romance and heaps of emotional drama powered by the inventive use of music. SS Thaman’s soothing melodies and a foot-tapping bit song are woven into the narrative to wondrous effect.

The film also benefits enormously from the performances of Allu Arjun and Murli Sharma. The former perfectly slips into the character of Bantu and brings swag and energy to the stylish sequences. His mesmerising dance moves, ease in a well-conceived fight-folk song, and the way he mimics popular Telugu heroes in a medley was a delight. Murli Sharma’s performance reveals both vulnerability and determination and he lends grace and gravitas to his character.

Although peppered with actors like Nivetha Pethuraj, Sushanth, Rohini, Rahul Ramakrishna, Vennela Kishore, and Navdeep, the film gives them little to do, leaving the bulk of heavy lifting to Sachin Khedekar, who is impressive in his comic timing. He receives enough support from Jayaram in a role that is a cakewalk for him. While Samuthirakani doesn’t disappoint, comedian Sunil has little impact in the film.

Overall, Ala Vaikunthapurramuloo delivers on its promise and is the perfect Sankranthi entertainer for the entire family.

Stay up to date on all the latest Entertainment Review news with The New Indian Express App. Download now
(Get the news that matters from New Indian Express on WhatsApp. Click this link and hit 'Click to Subscribe'. Follow the instructions after that.)
TAGS
Ala Vaikunthapurramuloo Allu Arjun

Wild Karnataka review: A stunning look at the diversity of life in India’s richest habitat