The film concludes with the shot of an opposite, relatively harmonious image playing on the telly. But we’ll get to that in a while.

The most violent image in Halal Love Story doesn’t even take place inside the narrative of the film. It plays on a television screen as the film opens—the 9/11 attack.

The film concludes with the shot of an opposite, relatively harmonious image playing on the telly. But we’ll get to that in a while. Halal Love Story and its characters yearn for harmony in their own lives. Even we do. Except for one, none of the characters ever raises their voice, even when they are experiencing turbulent emotions. It’s what the sound mixer (played by Soubin Shahir) would have preferred too.

Halal Love Story, the second film from Zakariya, the director of Sudani from Nigeria, is a perfect antidote for the present, pandemic-afflicted times. It doesn’t make one feel emotionally disturbed, even though its characters occasionally are. There is Shereef (Indrajith Sukumaran) who wants to be a model Muslim man. Before going to bed, he makes sure that he ticks of all the boxes in the Islamic righteousness book—it lists all the good qualities of an ideal, devout Muslim man. But is that enough? His wife Suhara’s (Grace Antony) attitude seems to suggest an unresolved internal conflict. It takes a filmmaker, Siraj, played by Joju George, to get that out in the open. As one character puts it: Getting to the actor through the character he is playing. But the process has already begun the minute they started making the film.

Halal Love Story is basically about using one’s art to exorcise one’s demons. It’s also about filmmaking, and also about how one character’s entry impacts another’s life positively. One man’s marital life is in disarray while another’s gets repaired. 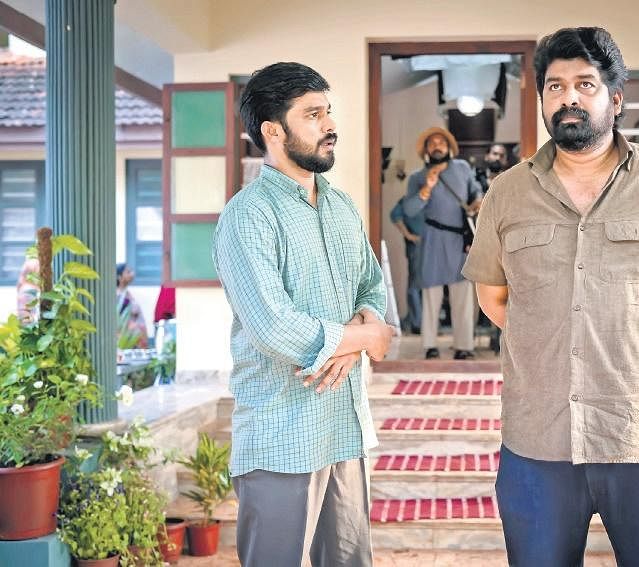 In a spiritual sense, this film is the sibling of Sudani from Nigeria. Family estrangement is as much a subject in Halal as in that film. Siraj is separated from his wife (Unnimaya Prasad) and makes repeated attempts to see his daughter. However, he is not as successful as the father in Sudani. Also, like Sudani, this film starts with something, then progresses into another thing and then another.

Halal, too, is a film that finds beauty in the simplest of details. Its conflicts are not too large.

At one point, a character asks another if he has seen the Iranian film Children of Heaven. Iranian filmmakers are good at making films about the smallest conflicts. Take Abbas Kiarostami’s Where Is My Friend’s Home? for instance. It’s about a child dealing with the ‘pressure’ of the simple task of returning his friend’s notebook. In Halal, a group of youngsters are not dealing with the pressure of making a big, theatrical film.

They are making a telefilm for their Islamic cultural organisation, and they have to make a ‘clean’ film, which for them is a big deal. They are against capitalism, but they can’t start shooting without the funding of a ‘capitalist’.

They want something harmonious, something progressive, but there is a limit to progressiveness. Certain things are not permitted, like a husband and wife hugging, even if the actors playing them are a real-life couple. (You see, a hugging scene is another thing that Halal and Sudani have in common.)

Like every filmmaker who believes in individual freedom of expression, Siraj can’t stand all this “committee filmmaking” nonsense.

Should he go ahead and exercise his creativity, or do what he is paid to do, for the good of the organisation that his narrow-minded scriptwriter, Toufeeq (Sharaf U Dheen), belongs to? It’s a tricky situation that brings out the best in actors Joju, Sharaf, Indraijith, and Nazar Karutheni who are getting better and better with each film.

What a delight it is to see these actors being as natural as possible! We also get to see some wonderful supporting actors who convey the challenges of making a film, especially production assistants who have to deal with annoying ambient noises.

Though Soubin and Parvathy only make minor appearances, they manage to brighten up the film with their hyper, eccentric characters. It’s not easy to say at the moment if Halal would get the same reception as Sudani.

Though they have a lot in common, they are not the same. Sudani has a more clear-cut ending, whereas this one ends abruptly. The Siraj sub-plot is not explored further after a certain point. How did he get over his anguish? How did his telefilm turn out? In the final frame, the camera pans to a television screen. It’s a scene from Siraj’s telefilm. It’s the image of a happy family—something Siraj always wanted but didn’t get, at least not yet. But there is still hope, and hope is a powerful thing.

Now we are on Telegram too. Follow us for updates
TAGS
Halal Love Story