The role of Enola Holmes should cement the actor’s ability to be at the centre of a film and hold it together, all by herself.

Enola Holmes, the film based on Nancy Springer’s series of books, begins with much vitality. The eponymous protagonist, the most anonymous of the three Holmes siblings, is a teenager speeding on her bike through the lush fields of Victorian England, as composer Daniel Pemberton captures her spirit through his track, Wild Child.

Even without Enola having to break the fourth wall, her energy and cheer comes through. It further helps that the actor Millie Bobby Brown — who you may know for playing Eleven from Stranger Things — plays this character with plenty of abandon and while another actor may have come across as being almost corny with all the fourth-wall-breaking, it is much credit to her that she sells it all with conviction and an infectiously sunny persona. 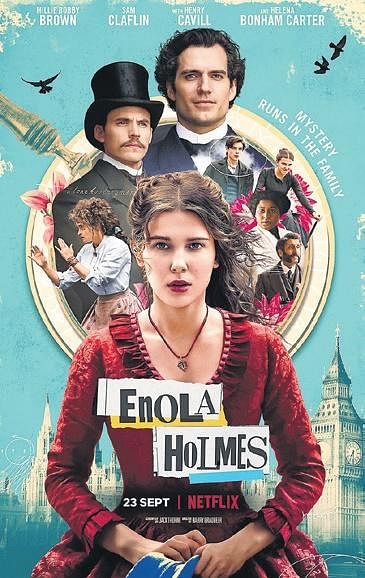 The role of Enola Holmes should cement the actor’s ability to be at the centre of a film and hold it together, all by herself. We learn quite early that the character, Enola, is a spirited, sensitive girl in the mould of her mother, Eudoria Holmes (Helena Bonham Carter, who could play these eccentric characters in her sleep). As is the case with the Sherlockian universe, no sooner do we begin to learn about Enola than we are hurtled into a mysterious case. Here, it concerns two disappearances — one of Eudoria and the other of a marquess.

Enola Holmes is what you would get if you added liberal dosages of feminism into a Sherlock Holmes case, a rather underwhelming one at that. The feminism in this film is not just admirable for intent but also for how seamlessly it’s woven into the Holmes investigation at the centre of this film. Despite this paean to womanhood being sung from start to finish in this film, not for a minute does it feel forced.

It begins when Enola is raised by a woman in rebellion against the suppressive rules of a Victorian society. Enola goes on to understand her mother better and even herself better as she struggles to belong in a system that ridicules her for her bosom size and condemns her to education — read imprisonment — so she can learn how to become worthy of a male partner.

If you are familiar with the Game of Thrones universe, you will draw many parallels with Arya Stark —without, of course, her famous murderous streak. Many features of the Victorian era Enola is stuck in, like its ideas of what constitutes education for women, are mocked in this film. The corset comes in for special ridicule from Enola, who does eventually find an amusing use for it.

She gets into disguise twice in this film, and her choice of clothes both times is an indictment of the treatment of women during the time. The first time, she blends into London society as a corset-wearing rule-abiding woman, and the second time, seeking no interruptions from men, she dresses up as a widow.

While on London, this is a film that thrives in the outdoors. From the lush fields at the beginning of the film to train journeys in private carriages to the cacophony of London life, Enola Holmes makes for an intricate sensory experience. Perhaps it’s the private conversations of two teenagers inside a train carriage, perhaps it’s the story of a teenager learning to belong in a new world, or perhaps it’s the music that evokes a sense of wonder… it was hard not to be reminded of the spirit of the Harry Potter franchise.

And much like those films, Enola Holmes too feels made for the theatre experience. The television seemed to stifle the visual and audio scape of this film, and a mobile phone, I dare say, would furthe assault this film, whose sights and sounds of Victorian England  are among its strengths. An important idea in this film too is drawn from its Victorian setting, with some of its beneficiaries being shown unable to make peace with the impending evolution their society is about to undergo.

This spirited film is admirable for its righteous political and feminist views, but nevertheless, is still one that loses charm as it goes. Even at two hours, it feels overlong, and fails to sustain the high spirits of its initial portions, even as it grapples with the challenges of bringing in the thrills of a detective thriller. Unfortunately, even rudimentary familiarity with the Sherlockian universe is enough to help you see the twists coming from a mile away.

The red herrings, the deliberate misdirections… it’s all predictable and makes it all a bit of a drag. Also, on account of your investment in Enola — and her multiple relationships, including that of her mother and her two brothers — there is not much time to focus on the marquess case at at the heart of this film. The listlessness grows despite the best efforts of Enola, who continues to break the fourth wall, but what initially seemed like a pretty charming device of viewer engagement begins to feel like cheap manipulation to win your attention — like in that scene when Enola is almost drowning to death, but then, winks at the camera before wriggling herself out of her situation.

In a sense, it feels almost like a metaphor for the film struggling to stay afloat. As you may have gleaned by now, I did not particularly find Enola Holmes, the film, to be riveting, but I found myself caring quite a bit for Enola Holmes, the character, partly due to the lively portrayal by Brown. I liked that a teenage girl is all by herself, trying to break out of limiting social conventions during a particularly oppressive time. I enjoyed that the said teenager accomplishes what many seasoned criminals only dream of: winning the respect of Sherlock Holmes (Henry Cavill).

Above all, after the deluge of Sherlock content that has come over the years — you know films and series that romanticise the coldly analytical side of the character — it is a relief to see another character showing a talent for crime solving but without having to compromise on her emotional side. Sherlock might say, “Emotion is understandable, but unnecessary”, but as Enola shows, even he is susceptible to its charms. Mainly for this reason—and for Brown’s charms as an actor— I look forward to seeing more of Enola, but hopefully, she will be solving more interesting cases.