'Eeswaran' review: A resurgent Simbu, but little else

Once, he even picks up the ball and throws it to the bowler, almost getting Puli Kutty run out. And then, the final ball arrives, and Eeswaran hits the CG ball for a six.

In the early minutes of Eeswaran, there’s a local cricket match. It is the final over— seven runs to win with just one wicket left. Eeswaran (Simbu) walks in to much applause.

The other batsman Puli Kutty (Bala Saravanan) asks Eeswaran to hit a single and leave the rest to him. However, Eeswaran says, “Crowd-a paathalla? Naa aadithan jeikanum nu wait panraanga.”

This last over becomes a metaphor, as Eeswaran continues to waste balls. Once, he even picks up the ball and throws it to the bowler, almost getting Puli Kutty run out. And then, the final ball arrives, and Eeswaran hits the CG ball for a six.

Eeswaran, Simbu must have hoped, would be that six. It’s his first release after his physical transformation; this is why the film is being called his ‘comeback’, even though he had a release in Vantha Rajavathaan Varuven in 2019.

It is great that he looks like he has turned back time. But it isn’t great that the film also seems to have travelled back with him.

All the tropes are from the nineties — the village leader and his sparring, a greedy family, the efficient, loyal servant, snakes, promises made on the death bed, an all-knowing astrologer... 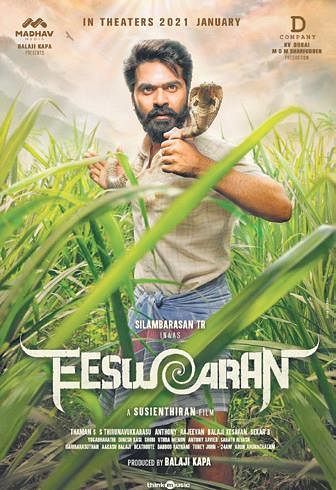 The film even begins with a voiceover that goes ‘Ivardhaan Periyasami’... Had this been an OTT release, I might have thought I was watching K TV.

The writing is laughably dull, and the screenplay even more so. It almost feels like the narrative was written with a story-building game — you know, where each person builds on the previous person’s last word.

Anything can happen in this universe… a corona test can detect holes in hearts; a man reeling from a cobra bite, can come back to perform stunts; murder attempts get forgiven, and decades-old promises get broken in a second and for no real emotional logic either. Eeswaran believes in not having a plan.

It seems that the writing team followed the same philosophy for this film. Eeswaran’s flaws don’t end with this. In a problematic track, an all-knowing astrologer predicts that a woman in the household is pregnant.

It turns out that it is a young, unmarried girl in the family. Eeswaran makes a case about marrying the girl off, advocating against abortion. How about asking the woman who is pregnant what she wants? But Eeswaran is not the film to expect such nuance from.

As Eeswaran was conceived and shot during the pandemic, covid-19 makes an onscreen appearance — only for laughs, of course. Characters roam with abandon, least worried about the pandemic they are part of.

Tests are treated like vaccines, a onetime event that makes you immune to the virus. Even if one argues that this could be a reality, watching it in a closed theatre, armed with masks and sanitizers amid strangers, feels like a nightmare come true.

The film has not one, but two completely unnecessary female leads. Eeswaran falls in love with Periyasami’s (Bharathiraja) elder granddaughter (played by Nanditha Swetha). But as he refuses to leave the village, she breaks up with him and marries someone else.

But somehow, this is ‘emaathradhu’ and her sister (a horribly miscast Niddhi Agerwal) decides to take revenge by ‘pretending to be in love’ with Eeswaran.

Why? No one knows… Funnily, not even Eeswaran himself. Had Thanos existed in this film and snapped his fingers to kill off fifty percent of all characters in Eeswaran, it would have made no difference. Strangely enough, Simbu’s mannerism in this film is snapping his finger… Alas, no character disappears.

Now we are on Telegram too. Follow us for updates
TAGS
Eeswaran

'Anbirkiniyal' review: A satisfying remake with an extra pinch of drama

'Raya and the Last Dragon' review: Disney returns with another classic