Vellam says that not all men with a bad habit are necessarily bad, and wants us to refrain from alienating someone who wants to change with the necessary push

In his previous film, Captain, director Prajesh Sen showed a man battling his inner demons and how his family is impacted by it. His second film, Vellam, has a man battling different demons. He goes through the severest of humiliation and becomes an embarrassment to not just his parents, wife and kid, but also to himself. But this is a relatively more uplifting film.

Vellam is a classic redemption tale, based on a particularly dark phase in the life of a real-life person who makes an appearance towards the end of the film. Murali, played by Jayasurya, is found most of the time in an inebriated state. The epitome of the ultimate drunk, his habits have turned him into a stranger in his own home. 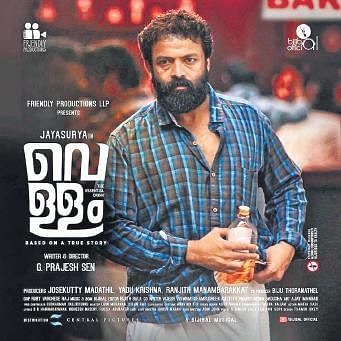 But the film never judges Murali, and I liked how it takes some time to show that there are people with far worse behaviour out there. Some of them get caught while others get a pass. It says that not all men with a bad habit are necessarily bad. It wants us to refrain from alienating someone who wants to change if given the necessary push. Murali desperately wants to change, but no one is willing to push him—not even his better half (played by Samyuktha Menon).

Speaking of, Vellam is a testament to Samyuktha’s growth as an actor. She is not the same actor we saw in Theevandi. She plays a woman who has had enough and doesn’t care what happens to her husband. She has lost all hope. But we also get the feeling that she might feel bad if something terrible does happen to him. What I liked, though, is how she never wallows in self-pity and doesn’t take any s*** from Murali. If I remember correctly, I’ve seen only one scene where she sheds a tear.

But at the same time, I wish Samyuktha had more to do in the film even though what she gets to do, with the limited amount of screentime she has, is quite impressive. I found her performance to be more natural and convincing than anything she had done before. There is an authenticity to the dialogue delivery and the dialect used, and using sync sound was a wise choice. If you are from Kannur, you may find yourself smiling at moments when characters say ‘cherunghane’ instead of ‘cheruthayittu’.

Jayasurya is in peak form here. There are moments where Murali is not in a condition to express his thoughts with clarity or properly sign a paper. We also get a uniquely seriocomical situation where a suicide attempt is met with indifference, much to Murali’s confusion. The scene that moved me most was when Murali tells a friend that he badly wants to reform, but can’t bring himself to do so.

Vellam also tells us that it’s unfair to ignore a reformed man—that his journey is incomplete if his loved ones continue to ignore him. I liked its intention and its central message—that it takes a village to raise a man. And the ever-reliable Siddique delivers yet another effective performance, as the man tasked with reforming Murali. He is like that teacher who is harsh and loveable at the same time.

But despite its numerous strengths, Vellam also has its speed-breaker moments. I wish this film didn’t come with any songs or music. Remember that Vellam is coming to viewers who have already seen films such as The Great Indian Kitchen or Soorarai Pottru, which either used minimal music or used songs more efficiently. In multiple moments in Vellam, music diluted some of the dramatic intensity.

I was also not so fond of the ‘mass’ redemption climax. The skipped frame rates and slow-motion made it look like a clothing ad featuring Jayasurya. The sudden deviation in tone was so jarring. I wish the film had put across some of its ideas more subtly. When the credits rolled, I couldn’t shake off a strong feeling of familiarity. I didn’t come away feeling as emotionally overwhelmed as I had hoped before going in.

Now we are on Telegram too. Follow us for updates
TAGS
Prajesh Sen Captain Vellam Jayasurya Samyuktha