More importantly though, it’s a film that’s so original in its objective and treatment that you can barely take your eyes off it.

CHENNAI:  At a time when the idea of a Tamil horror film coming out is enough to give you the chills, director Selvaraghavan unleashes auteur touches into this genre to create a film that works brilliantly in patches. More importantly though, it’s a film that’s so original in its objective and treatment that you can barely take your eyes off it. It’s fascinating that the filmmaker manages this with the bones of an ofttold horror story: you know, when you-know-what happens to a young, innocent woman, causing her to become you-know-what.

If you are rolling your eyes already, know that the filmmaker, by employing the ingenious twist of focussing not on the victim, but on the malevolent protagonist instead, has managed to make a film that is addictively eccentric. The depraved protagonist, the antithesis of ‘saami’ if you will, is ironically named Ramasaamy (SJ Suryah). Ramsay, as he prefers to be called, has come to wrest control of a big business, but more relevantly for the purposes of this film, he is satan in human form (his frames are doused with plenty of red, just so you know). 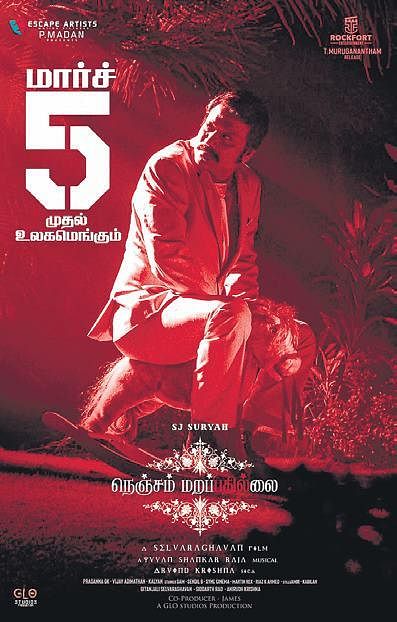 He is a fearless psychopath who is almost bored with the idea of murder. He is sneaky as a snake and almost takes quiet pride in his depravity. He suggests at one point (or is it Selvaraghavan?) that he is the embodiment of every person (n. scum). SJ Suryah plays this character with much charismatic relish that it got me thinking about whether the same praise that’s generally accorded to subtlety in performance is generally accorded to such exaggerated portrayal. The actor is a fantastic fit in the Selvaraghavan universe. His face is dry and stoic one minute, and in contorted fury, the next.

He hams it up without inhibition, and with such conviction that you ask no questions when he takes to mimicking the late Sivaji Ganesan in dialogue delivery. While many actors, chiefly Vivek, have utilised the Sivaji style to create humour, here, Ramsay’s notorious ways adds an evil twist to all the amusement. SJ Suryah’s performance as he struts about his mansion, ordering his servants and being such a slave to his senses—evoke images of a similarly corrupt man Rajinikanth plays with such style in Netrikann. Towards the end, as Ramsay drawls, “Mariammmm!”, a different evil Rajinikanth character, one from Enthiran, came to my mind.

On some level, I couldn’t help but wonder if Nenjam Marappathillai is a very deliberately designed morality test for us all. Ramsay is charismatic, funny, eccentric, and most importantly, the devil incarnate. So then, are you tempted to cheer him on, like many of his minions (“kozhandhainga”, as he affectionately calls them)? Or are you repulsed by his advances on Mariam (Regina Cassandra)? Had Ramsay, who declares that all humans are vile, been part of my screening, he would have relished watching the audience cheering on his villainy, thriving in his perverse fantasies of Mariam, while a romantic track plays in the background.

A loud cheer ensued when this embodiment of evil, Ramsay, lectures that true love occurs only at first sight and that familiarity can create only lust. The devil’s words drip with charm but are not to be believed, it is said—but nobody seemed to care. I liked though that Nenjam Marappathillai was playing, what seemed to me, these meta games on its audience through this despicable ‘hero’. The filmmaker’s creative choices are also, of course, responsible for evoking these reactions like, a lengthy shot of a cleavage, for instance…

Would it have been so difficult to establish that Ramsay is ogling without having to make us privy to his visual? Or, in Nenjam Marappathillai, is this a calculated, meta choice designed to ram home Ramsay’s point that we are all debased voyeurs… his minions, so to speak? Is that perhaps why, every time his fantasy takes flight, Ramsay, dressed in red and wearing a red wig, dances about on stage—as though to entrance us? We can draw conjectures and argue over these details. I enjoyed that this film allows for such interpretations.

Selvaraghavan, of course, has made such choices from his very first film, Kadhal Kondein. Nenjam Marappathillai even shares a few thematic similarities with that film: the Christian ideas of sin and redemption; a character (Mariam in this film) raised in an impoverished Christian orphanage, who struggles to deal with the ways of the rich and the corrupt (or perhaps both rich and corrupt mean the same in Selvaraghavan’s universe) … There are other Selvaraghavan touches as well: characters who stand still for an unusually long time before suddenly racing away; characters who walk with very limited movement of their hands; characters who deliver long dialogues without once blinking their eyes; characters who, when talking, often resort to the singsong use of non-verbal utterances…

Even an offhanded mention of ‘nethu vecha meenkozhambu’ brings to mind the lyrics of ‘Enga Area’ (Pudhupettai). While on Yuvan songs, the rock score in those Ramsay ‘ego’ sequences are a wonderful choice to capture delirium as are his tracks to capture Ramsay’s elation at his wife leaving town, or say, his minions deceiving the police. These are all such inspired portions and prove once again that when in form, Selvaraghavan is among the best in the business when it comes to capturing darkness of character. The film also takes refuge in classics including ‘Sorgam Madhuvile’, ‘Kadhalin Deepam Ondru’, ‘En Iniya Ponnilave’… while selling Ramsay’s malice, which also perhaps explains the wide applause for such portions.

As I said, there is plenty to dissect about this film, and while it may be reasonably effective as a dark horrorcomedy, it is all the subtext that makes this film so fascinating for me. The devil is running riot, and the god is, but an ineffective ghost which could well be a commentary about the state of our world. Only two characters are able to see this weak god: an old man and a young boy. The old man may or may not be real and can be thought of as an angel figure whose visual impairment could be a consequence of the blindingly basal nature of humanity.

The young boy, of course, isn’t yet corrupted. There are also all the parallels between Mariam and Jesus, and how she takes on punishment, so it can benefit the innocent. There is commentary on wealth and the suggestion that it goes handin- hand with corruption of character. Ramsay is a shining example. His wife, Swetha (Nanditha Swetha), is also one to prioritise her privileges. The servants are all lured by money and controlled by authority, and yet, look at them suggesting that Ramsay is ‘as generous as MGR’. In contrast, note Mariam’s disinterest in wealth and that’s where we can perhaps get the film’s answer out of a life of debasement: faith. Note that the two main good characters two women  are both shown to be devout believers. It’s a big letdown that for all its charms and eccentricities, Nenjam Marappathillai lapses to such a tepid end, exacerbated by the dreadful visual effects.

Be it the scene that shows us multiple versions of Mariam or the climax fight choreography in which two characters go airborne in battle, the shoddy execution leaves an ugly scar on this film, and almost makes you forget the great stretches of filmmaking preceding it. But such are the injuries left on our psyche by horror duds over the last decade that Nenjam Marappadhillai feels like a rousing achievement, if only because it works for the most part; it is twisted in a uniquely Selvaraghavan way; and there’s plenty to chew on as well. And when you consider that this film has been delayed for almost half a decade, it reminds you of the unique voice of this filmmaker and why it’s precious, even if it’s sometimes flawed.