The police apparently had a difficult time managing the fans, who thronged the two entrances of the Police Recruits School on Avinashi Road on August 1.

Fans of actor Ajith Kumar took to Twitter to celebrate their hero's participation in the 45th Tamil Nadu State Shooting Championship by trending the hashtag #THALAsActionAtRifleShooting on a national level. Pictures of the actor from the event are being shared by fans on social media.

Ajith's pursuits outside cinema include racing and a recent interest in rifle shooting is well known. Now, the actor has taken part in the 10-metre air pistol and 50-metre free pistol competition in the State Shooting Championship, which is being held in Coimbatore. The event goes on till August 3rd.

Ajith has reportedly qualified for the next round in the 10 m Air pistol event.

#Thala #Ajith qualifies for the next round in the TN State Rifle Championship pic.twitter.com/MUHVbt7yzr

The police apparently had a difficult time managing the fans, who thronged the two entrances of the Police Recruits School on Avinashi Road on August 1.

Over 25K+ Tweets for our Multi-talented Thala Ajith #ThalaAJITHatRifleChampionship pic.twitter.com/kvda6AnZTH

About 850 participants from various districts are competing in the event. 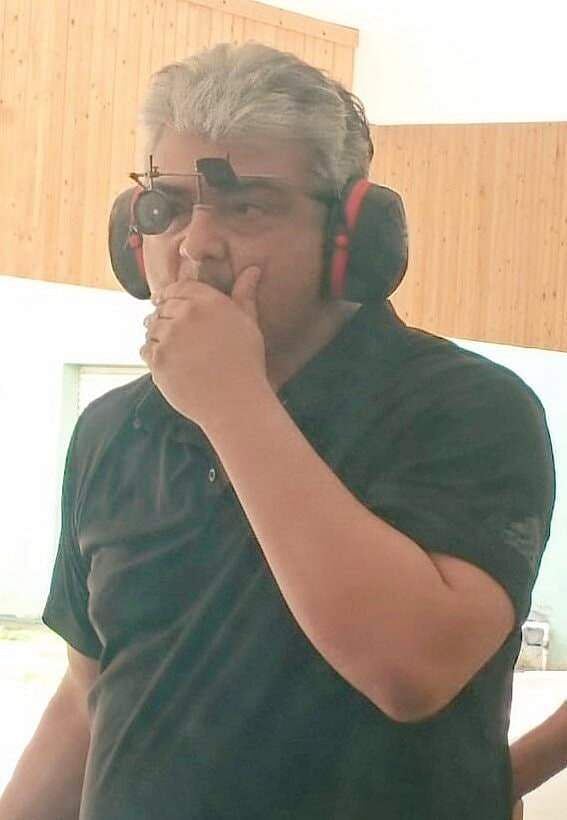 A couple of months ago, similar photos of the actor rehearsing with a rifle were also circulated.

Ajith's passion for rifle shooting apparently began during his stint as an NCC cadet in his school (Asan Memorial) days.

Incidentally, Ajith was recently appointed as a Helicopter Test Pilot and UAV System Adviser by The Madras Institute of Technology for its team Dhaksha, which participated in an international Unarmed Aerial Vehicle launch competition earlier this year.

The actor, in addition, is a keen still-photographer.

Meanwhile, Ajith, awaiting the release of his next film, Nerkonda Paarvai, on August 8. It is the Tamil remake of the Bollywood hit Pink.

With inputs from online desk

(This story originally appeared on cinemaexpress.com)