The minimal commercial and industrial activity during the lockdown has resulted in an improvement in groundwater levels in Chennai.

CHENNAI: Not just the air quality. The lockdown has also improved the groundwater levels in Chennai.

On a year on year comparison, the average levels have increased by one metre, according to official data released by Chennai Metropolitan Water Supply and Sewage Board. The Niti Aayog’s Composite Water Management Index, released in 2018, had highlighted that the city would run out of groundwater by 2020.

“With the decrease in commercial and industrial activities, most water is now being diverted only for domestic purpose. As per the city’s requirement, 700 MLD of water is mostly given as piped water supply,” said a senior CMWSSB official. While most of the city has recorded an increase from last year’s levels, groundwater at Ambattur zone remains the farthest, at 7.72 m. Officials say, social conditions and last year’s rainfall have a role to play in this. 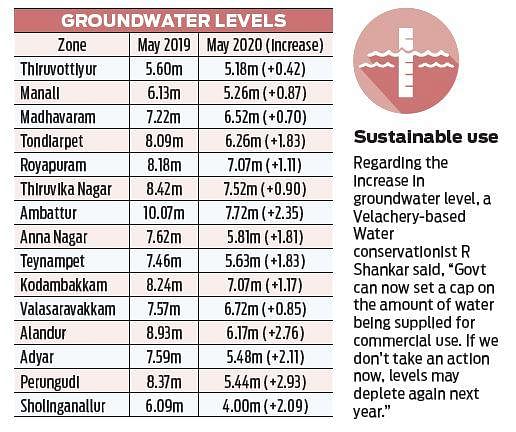 The official said that last year, industrial use coupled with drought conditions made things worse. "Since the water is adequate, people are less dependent on ground water. So, the level will gradually increase," he said. Last year after Metro Water department decreased supply, most residents used borewells to pump out ground water for daily use.

In zones like Kodambakkam, Royapuram and Thiruvika Nagar which usually witness water shortage in most of the summers, water level rose by 1.17m, 1.11m and 0.90m respectively.

However, the groundwater continues to be the lowest in Ambattur zone. While last year it was available at a depth of 10.07m, it is now available at 7.72m. Official say social conditions and last year's rainfall have a role to play in this.

"The government can now set a cap on the amount of water being supplied for commercial use and long pending work on pipelines in different areas must be completed. If we don't take an action now, next year the levels might start depleting again," said water conservationist, R Shankar from Velachery.

Also, post last year's drought a lot of people installed Rain Water Harvesting systems in their apartments/homes in a bid to recharge the groundwater table.

Now we are on Telegram too. Follow us for updates
TAGS
chennai Chennai water Chennai groundwater Chennai lockdown impact