Silk Park at Keonjhar has been a turning point in the lives of 200 tribal women who learnt weaving a year back and are now selling sarees online, writes Diana Sahu

BHUBANESWAR:  When a light weight Tasar silk saree with beautiful floral prints was sold on Flipkart within just three days of being showcased on the e-market place, the happiness of a group of tribal women hailing from the remote corners of Keonjhar district knew no bounds.

Manufactured at the Bhagamunda Tasar Silk Park (BTSP), the six-yard drape was handwoven by these women who learnt weaving only around a year back. Hailing from families of tasar growers of the district, they were into household work till the silk park opened its gates for them in 2019. Today, over 200 tribal women are not just producing silk yarn but also, weaving, printing and painting the sarees.

A first of its kind initiative in India started by the Textile and Handloom department and Keonjhar administration with a concept of ‘farm to fibre to fabric’, the BTSP has been a turning point in their lives in terms of skill development and financial independence. 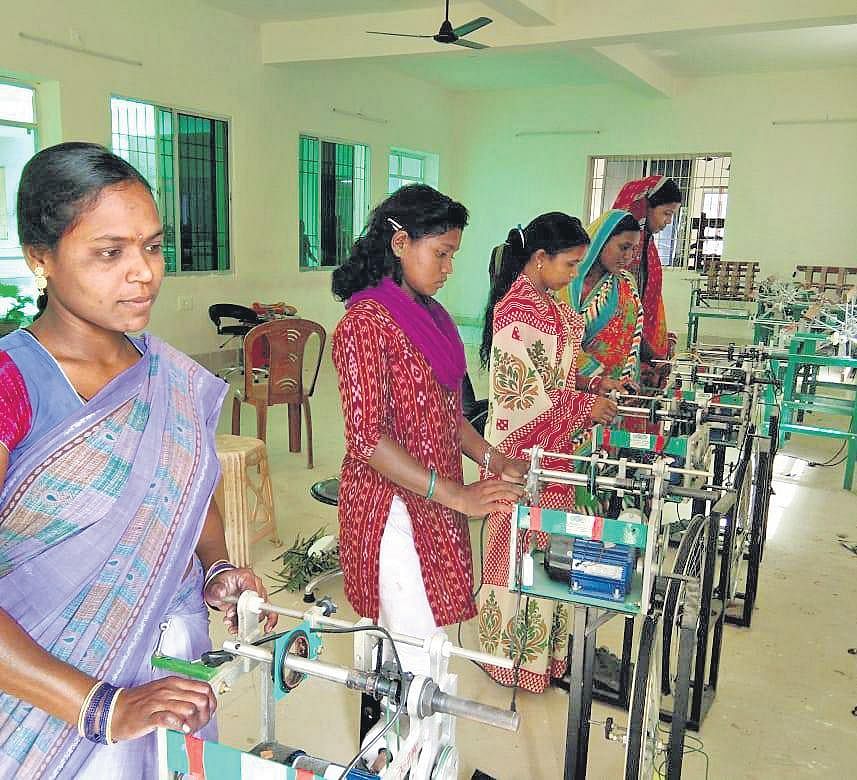 Villagers of Keonjhar have traditionally been into tasar farming. But, the vocation lost its charm when the mining boom hit the district as the people found better income opportunities in the sector. However, when mines in Keonjhar were closed down a decade back, the tribals had to fall back on their traditional expertise. The entire field was, though, disorganised and smallscale.

The turning point came in 2017, when the State government took up tasar promotion in a big way. Under the project, every villager was offered one hectare of land to take up cultivation of tasar host trees like Asan and Arjun and other farm inputs. When production of cocoons increased, the Government in 2019 decided to open the BTSP which aimed at creating round-the-year income for families of tasar growers.

Not stopping at production, the BTSP sought to promote value addition and took steps to skill the womenfolk in value addition, to churn out finished products from sarees to fabric. Officer in charge of the BTSP PK Mohapatra, said, “the objective was to double the family income by involving both the man and woman of the house along with ensuring sustainable earning for them throughout the year.

The women were trained in making sarees, fabric and other products by processing the raw silk. Initially, 10-15 women from the area came forward, but more and more joined them realising the prospects.” “We earn Rs 1,000 for producing 1 kg of yarn. In finished products, besides sarees, we also produce jackets, kurtas, stoles, dhotis, masks and handheld fans,” said Kuni Dehury, a woman craftsperson.