KALAHANDI: In 2006 when Krushna Nag took to farming in his 2.5 acre of ancestral land at Sanchegaon village under Golamunda block of Kalahandi, he had to face the dual problem of drought and hard soil.

Today, he makes a profit of Rs 18 lakh per annum from the same land, thanks to crop diversification - shifting from paddy farming to horticulture, pisciculture and livestock rearing.

The journey in over the last decade has not been an easy one, said the 48-year-old progressive farmer.

“It was correct use of farming technologies, government schemes, water and fertilisers that changed my fate in this drought-prone area”, he added.

His father used to grow paddy in the land before he decided to get into agriculture. “But the earnings were never enough to run the family”, said Krushna who began by planting mango trees in 2006-07 with help from Horticulture Mission. 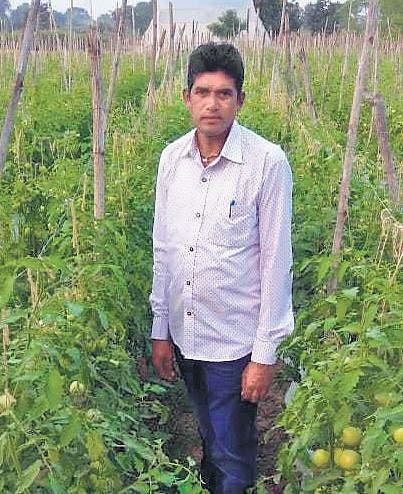 As the fruiting takes time, he decided to grow vegetables in between the trees the next year but irrigation was a major roadblock.

“My wife and I used to carry big water containers on our backs to water the plants. A year later, we managed to sink a shallow well which helped us grow vegetables by intercropping in 1,000 sq mtr of land. This gave us returns of Rs 2.30 lakh”, he recalled.

Happy with the profit, Krushna concentrated on growing vegetables and simultaneously developed poultry and pisciculture by digging two farm ponds.

When savings from agriculture improved, Krushna in 2013 acquired a 10 MT capacity cool chamber and a tomato grading machine with subsidy from Horticulture Mission.

“With the help of government schemes and farm innovations, I have managed to grow a variety of vegetables and fruits in my land. The fish ponds and poultry farm are also giving good returns and a year back, I also installed an egg hatching machine”, said Krushna.

For growing vegetables, he collects 60 tractors of cow dung from across the area and uses it as manure. For the other crops, he uses both organic and chemical fertilisers.

As Krushna has created a niche for himself as far as quality of his vegetables and poultry are concerned, he gets buyers from neighbouring districts and Chhattisgarh.

For his innovative farming techniques, he has been felicitated by the Krushi Vigyan Kendra at Kalahandi and farmers from other States, agriculture officials visit his farm to learn about his ways of cropping and farm management.

He has also been roped in by the Agriculture department as a master trainer for farmers.