Madurai vet leases out his bike for baby squirrels to nest

When he opened the bonnet of his bike seat he expected to find the wires of his bike askew but what he actually found was something else entirely.

MADURAI: Meril Raj, a resident of Koodal Nagar in Anaiyur, saw a squirrel hanging out at his bike far too often. When he opened the bonnet of his bike seat he expected to find the wires of his bike askew but what he actually found was something else entirely. 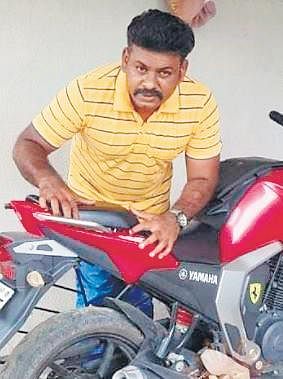 “A squirrel used to come to my bike often even though there are trees nearby. I was at first scared that the squirrel would have bitten off the wires of the bike. But when I opened the bonnet of my bike seat, I found a nest prepared for the yet-to-be born squirrels. I did not want to disturb them so I left bike there and started using the other vehicle,” he said. Raj, who is a veterinary assistant surgeon, has been letting the squirrels live in his vehicle for a month now.

A couple of weeks later, Meril found three baby squirrels in his bike nest. In a video shared with TNIE, the mother squirrel is seen taking back one of the baby squirrels that was left on the ground by him.

“The same night, the baby squirrel was brought back to the nest in my bike. Squirrels are in general sensitive beings. I understood they felt secured inside the nest than anywhere else. So we decided to leave the bike for them until all three squirrels grew out of nest.”

How did the squirrel find its way inside the vehicle? By entering the bike sideways and with a little help of the elevated seat. “It would cost me Rs 5,000 to repair the broken wires of the bike. But it is all worth it,” Meril said delightfully.

Now we are on Telegram too. Follow us for updates
TAGS
squirrels Madurai