The shift from film to digital has been in the making for over a decade, but in the last few years the changes have been more noticeable than ever before. In fashion photography, what once pivoted around the perfect frame is now evolving to include movement—in the form of GIFs, projections and videos. “It’s an extension of your craft and your mind. Photography will always hold its ground, but it is moving towards a more experimental art form,” observes Mumbai-based photographer Colston Julian. The signs are everywhere. Electronic billboards are taking over Times Square in NYC, lensmen like Nick Knight are shooting on iPhones (the Britisher dismisses critics and claims it’s a new medium that “we have to embrace”) and there are even fashion campaigns on Instagram. The trend is moving to our shores, too. But even as they embrace the new—experimenting with technology and signing on agencies to ensure their work gets a good showing on social media—our lensmen still retain their core strengths. We chat with four leading fashion photographers on changing trends and memorable photoshoots.

This year marks Tarun Khiwal’s 25th year in the industry and the veteran is still trying new things. “Photography has evolved so much, especially new lighting systems with state-of-the-art technology, giving more possibilities to push myself to create better images and build on my sensibility,” he shares, adding that the latest change is digital. “Social media and the dawn of the digital era has a lot of potential. The positive is that many aspiring photographers now get the opportunity to present their work on various online platforms. But it also brings with it a lot of frivolousness and meaningless content,” says the 49-year-old, whose love of photography began when his father gifted him a Pentax camera at 15. The veteran lensman, who studied mechanical engineering (but gave up that career after just eight months), says he derives inspiration from the everyday and his travels. “I am a very rich person—rich in my experiences. And with the kind of experiences I have, I don’t need to Google for inspiration,” he smiles. Khiwal also believes that his photographs are raw and real because he doesn’t bombard his models with hundreds of references to achieve what he wants to portray. “I set them free, to take on the character of the situation given to them on their own. Then they do what they want to do instead of copying the idea from a done-to-death reference.”

Important lesson.
I learnt very early that one has to be very patient in getting the best out of people. People’s hearts are like deep wells—nobody knows what’s at the bottom. All you can do is imagine it, by what comes floating to the surface every once in a while.

Memorable shoot.
Shooting for the L’Affaire campaign has been the closest to my heart. Through it I wanted to show a model’s journey in life, her connection with the universe, and the sole purpose of her being. But later I realised that it wasn’t her journey that I was showing, but rather my own; seeking life’s answers and trying to know the unknown.

Planning ahead.
As this is my 25th year, I have very big plans. A coffee table book is definitely on the list, along with many more. I’ll disclose them once things are finalised.

Tool kit: I use both the Hasselblad and the Nikon. But the one thing I can’t do without is meditation.

Arjun Mark recalls a challenging shoot for a Filmfare cover—with nearly 15 celebrities and three times the trouble. “All the A-listers were there, from Amitabh Bachchan to Katrina Kaif and Sidharth Malhotra. I was so nervous because everyone had an opinion and there were a lot of egos to handle. But then, that’s what we do—think on our feet, fire-fight and produce great photographs,” says the 30-something, whose April shoot with young Singapore model Diya Prabhakar for Elle was a breeze in comparison. Calling his photography as constantly evolving, he says he is always surfing the internet to keep abreast of fashion trends and what people are doing internationally. “There are a lot more mediums to experiment with today. Earlier, there was just film, but now with digital photography and image editing software, it is not just about clicking pictures, but more about creating visual imagery. We can enhance the picture, manipulate it, there’s so much you can do to make each one a work of art,” says Mark, who admires Austrian photographer Andreas Bitesnich’s play with light, clean lines and artistic frames. Calling his style real and raw, Mark states that imperfections are also key to a great photograph. “My photos will have some imperfections, that’s what makes my pictures perfect,” he smiles.

Before the shoot.
I do a lot of research, but mostly on what I’m going to shoot and how I want it to look. Last week I did an underwater shoot—in a pool and in the ocean—so I had to work out the technical aspects, like how the light would react. I don’t do too much research on the people I shoot. But it also depends on projects. If I’m shooting a celebrity or a sports person, I will find out more about them and what they do. I also chat with them beforehand so we develop a rapport.

Favourite model to work with.
I enjoy working with Alia Bhatt. She is very enterprising, lively, and brings a very young vibe.

Pushing the envelope.
It’s great to work with Vijendra Bhardwaj, the fashion director of GQ India. He doesn’t look at a picture as just a picture, but rather as art. He is very meticulous and he always makes me push my limits.

Tool kit: I mainly shoot with a Canon 5D mark 3. I used to use a Hasselblad, but the Canon is more versatile.

Education isn’t everything. Ask Colston Julian, who never studied to be a photographer, but is renowned for his edgy clicks. A mind like a sponge is a photographer’s biggest asset, especially now when mediums are fast evolving. “The digital medium demands that the photographer extends his capacity and adapts motion—be it as projections, 3D, VR, cinemagraphs or the 360 format. We have to look for new ways to communicate and understand where the business is going,” says Julian, who made headlines in 2012 for teaming up with Anita Dogre for a short film showcasing her couture, one of the first experiments of its kind. Mentored by Prabuddha Dasgupta—who advised him to form a relationship with his subject and his environment—he lists photographers Bharat Sikka and Peter Lindbergh as his influencers, along with the cinematic vision of Quentin Tarantino and Alfred Hitchcock. Acknowledging that youngsters have it tough today (“when I started off, there were 25 photographers of note, today there are 50,000 for sure”), he feels they lack direction. “They are trying to be edgy. It is easy to replicate something from the West or to be trend based, but how does it work with our environment?” he asks. “I do edgy work, but within a frame. I recently did a whole story around the Ganesh festival, something that signifies Mumbai, but we put a model in there. There needs to be a connect.”

Constant innovation.
I watch a lot of movies and I am interested in design and architecture. I also travel a lot. I love going to Japan, they are truly such stylish people—the culture, films, their street style, the garment
construction, everything is
so inspirational.

Memorable shoot.
Judi Dench is one of the finest people I’ve photographed. I didn’t know what to expect, but she was like ‘what have they told you, that my knees are weak? Ha! That’s nonsense. Let’s go. Where do you want to shoot?’ I have photographed so many beautiful women, but none as charming or graceful as her.

Your forte.
I still shoot film and I embrace digital. My work is cinematic; I like the women in my images—they are stronger and with personality.

Tool kit: I use a Sony DSLR and Phase One digital backs for lighting. There’s also Broncolor and the tool I can’t live without, tungsten lights. 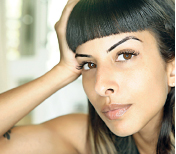 The only woman in fashion photography in India when she started out more than a decade ago, Anushka Menon is now a leading name when it comes to beauty editorials. Candid about being turned down by photographers like Prabuddha Dasgupta and Tarun Khiwal for an assistant’s job back then, she recalls how she started out on her own. “Perhaps they thought as a woman I wouldn’t be able to lug around heavy equipment? So I put together portfolios, magazine work and designer lookbooks and made it on my own terms,” she says. Before long, she was shooting designer Manish Arora’s campaign, like the Fish Fry campaign with Reebok. Menon, 31, who is originally from Muscat, says she spent over a year with film before switching to digital. “I loved it, shooting  an endless number of images, and much faster.” The only thing she misses? “Anticipation.”

Important lesson.
Patience. Celebrities will always be in a hurry, rushing from shoots or to the airport. I use Instagram to communicate and am super inspired by photographers Mert and Marcus who are edgy and make even straight up sex beautiful to look at.

Memorable shoot.
I’ve shot with Deepika Padukone and she can help create something magical. Ranveer Singh enjoys himself in front of the camera and is not too self-conscious, which is great. I enjoy working in daylight but I am open
to newer forms of photography,
with movement.

Tool kit: I use Broncolor lighting gear. I recently switched from Canon to Nikon, but rent Canon’s new DSLR, the 5DS, for 50 megapixel images.

Stay up to date on all the latest Lifestyle news with The New Indian Express App. Download now