Actors and their trysts with agriculture

This need to escape the arclights every now and then and return to a simpler life is finding resonance closer to home.

These actors and directors who have taken up farming can teach you a thing or two about being self sufficient.

In the last decade, there haven’t been too many actors who have captured the global imagination as much as Brad Pitt and Angelina Jolie. So when the Fury star bought a French winery four years ago and proclaimed “I’m a farmer now”, the world sat up and took notice. As it turned out, Pitt—who encourages his children to work on their own organic patches at home—was not satisfied with just a land deed to his name. He told the Daily Mail that he loved “learning about the land and which field is suitable for which grape” because it is the “antithesis of the drive, the want, the need to get ahead, that is indicative of life in Hollywood”.
This need to escape the arclights every now and then and return to a simpler life is finding resonance closer to home. While R Madhavan has set up a terrace garden in his penthouse in Mumbai—where he grows organic vegetables using hydroponics (a farming method using water and no soil), Bollywood stars like Salman Khan are growing produce in their backyard. But the more interesting stories belong to actors who have purchased tracts of farm land and are actually manning tractors and harvesting grain with their families in tow. Nawazuddin Siddiqui candidly admits that till he was in his mid-20s, he used to actively work on his farm. “Agriculture has been in our family for a long time, from my grandfather’s and great grandfather’s time. Now I have two farms, a 70 acre and a 15 acre one in Budhana, a village in Uttar Pradesh,” says the Freaky Ali star, who makes it a point to visit them at least five times a year, spending a minimum of 10 days each, immersing himself in the day-to-day work.
For others, the interest has been sparked in response to the chemically-treated foods we are forced to consume. Down South, filmmaker Vetrimaaran has acquired farmland and is currently detoxifying the ground because he wants to begin organic farming. “It’s worrying that we are literally eating poison in the form of food. It is pumped with fertilisers and pesticides, and most of them are carcinogenic. Whoever can, should start taking the cause of the land seriously,” says the Visaranai director, adding that “celebrities getting involved does change the way people look at organic farming”. But he cautions that the starry connect shouldn’t dilute the main idea, of sustainable organic farming, especially with big players and big money coming into the picture.
In the Malayalam film industry, too, top actors like Mammootty and Srinivasan are trying to get the message across by getting back to their roots. The former practises natural paddy cultivation (using manure like green leaves and cow dung) in his 17 acres of land near Kottayam, in Kerala. He even drove a tractor and helped transplant saplings (pictures of which went viral a few years ago), to stress the point. Around the same time, a video of Srinivasan sowing seeds in his paddy field in Kandanad also took social media by storm. The actor later admitted that he hoped it would inspire more people to take up farming. “It is easy to buy organic vegetables and foods from the market, but we need to realise that we can grow them ourselves,” he had stated. This is a lesson we need to learn quickly. If stars can balance roles, red carpets and farming, it’s time we took pointers. If you need more inspiration, read on.

Kishore Kumar G, Karnataka
I am from a rural family, one that had its eyes set on the city. They wanted to come to the city for a better life and better opportunities. But my aim now is the opposite and they often call me mad for doing what I do,” chuckles the Kabali actor, who has an eight-acre farm near the Bannerghatta National Park. Recalling how, in the beginning, he only wanted to see yield, the 42-year-old admits that experience soon changed his stance. “When I saw the saplings I planted grow, my perception shifted. It’s such a matter of pride to see something you’ve nurtured grow that way, just like how you bring up kids,” he shares, adding, “My kids are still a little young, but I am letting them grow things on tiny patches of land so they inculcate the habit.” While the produce they harvested was initially for personal use, in 2012 they opened an organic store called Buffalo Back. “My wife, Vishala, is very proactive. The store, which aims to promote organic products, was her idea. We started off with a branch in Jaynagar and now we have an outlet in Malleshwaram, with more in the pipeline,” he says. While he hasn’t moved to the farmhouse yet, the actor—who has films like Vada Chennai, Kitna and Saatai 2 releasing soon—says they will do so by the end of the year. “Farming has changed me as a person. I’ve learnt a lot—simplicity, discipline. We have embraced a minimalist life. Life has become a lot easier now. Plus we’re self-sufficient,” he says 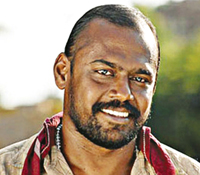 For the Aravaan actor, farming is a family project. On his three-acre land in Periyapalayam—which he bought for the simple reason that he wanted to grow and eat good food—everyone pitches in. “My wife is very interested in agriculture, my four-year-old helps out by pulling out weeds and harvesting small crops like coriander, even my personal assistant comes down often to help,” says the 47-year-old, whose self-sufficient model has inspired many fellow agriculturalists and farming enthusiasts to visit and emulate. For Pasupathy, his life is now about going back to the basics. He mostly grows local and indigenous plants and trees. “We started off with rice, chickpeas, legumes and pulses, and a lot of trees. We also have chicken, cows and fish. Whatever the household needs for a year is more or less grown here,” he states. Choosy about his work, the actor only takes a few projects, which gives him plenty of time to do what he enjoys. But when he does juggle roles, his wife takes over. “My wife (Suriya) is an architect, but she quit it to get into this full time. She handles everything and sometimes I feel like a visitor,” he laughs. Self-sufficient even when it comes to labour, he admits to hiring help at the farm only when the work is too much to handle by themselves. “Farming isn’t easy. It needs an attitude, a confidence and a lot of humility. If we want to see a change, we need to make it. The Gandhian philosophy says grow local food and eat local. I look at it as a way of life rather than a political principle,” he concludes. 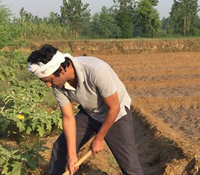 If there is ever a tale of rags-to-riches and balancing the high life and the slow, then Siddiqui’s is it. If you spot the 42-year-old walking the red carpet at Cannes and hobnobbing with tinseltown royalty on one day, just a few weeks later, you’ll find him in a tee and comfortable shoes, tilling the soil or harvesting tomatoes in his farms in UP. “It’s very relaxing. When you’re doing difficult characters and you go there and drive a tractor, it really keeps you grounded,” he says, adding, “When I’m there I wake up early, by 5 am; it’s not a city where we can sleep in.” He is often accompanied by his family and, while his wife Anjali isn’t too interested, his children are curious. “They’re too young to work or help around right now, but let’s see when they grow up, how they look at the place,” he smiles. Siddiqui, who harvests rice, wheat, millets and a whole host of vegetables (which he sends home and also sells at local markets), is most excited by a new irrigation system he will be introducing in a month. “When I was in Cannes last year (for Raman Raghav 2.0), I visited Nice and met a few filmmakers and farmers. They told me about their centre pivot irrigation (an overhead sprinkler system that is efficient and conserves water). I will be doing that in my farmland, so others can also make use of it. If you look at our villages, we use so much water. Our generation will manage, but what about the next?” he asks. The actor is also clear that when he finally bids adieu to the screen, he will return to the land because “it’s in my blood, there’s no running away from it”.

I was passionate about going back to my roots (my father had a farm in Karnataka). So I bought a few acres of land 10 years back and started planting trees. In the last four-five years, I’ve become a serious farmer, growing vegetables and grains. I’m currently working with agriculturalists like Bannur Krishnappa (Mysore) and Subhash Palekar (Maharashtra) to start seed banking at our nursery in Auroville, and encourage local species.—Prakash Raj, actor

I have been farming organically for 20 years. There’s no comfort like growing your own food, being healthy and self sufficient. However, the younger generation doesn’t always understand this. My own kids don’t have the interest. But at the end of the day, our land is our backbone and we should always find a way to go back to it.—Salim Kumar, actor

I’ve just started learning the basics; I’m growing bananas, jackfruit and mango trees to begin with. Hopefully, someday everyone will have a little garden of their own. When we were in school, we were taught to grow our own produce—when you grow your food, you respect what you eat.—Sunder Ramu, actor-photographer

—with inputs from Lavanya Lakshminarayanan

Stay up to date on all the latest Lifestyle news with The New Indian Express App. Download now