A himalayan hoard of testimony

This compilation of essays ranges from the Mughal era to the present.

The lineup of essayists in this volume shines as brightly as the Himalayas they write about. The book has been divided into three sections: ‘Adventures’, ‘Meditations’ and ‘Life’. The essays, which have been largely extracted from previously published material, range between the Mughal era and the present. And the star cast of contributors include emperor Jahangir, Fanny Parkes, Peter Matthiessen, Dharamvir Bharati, Arundhathi Subramaniam, Jawaharlal Nehru, Edmund Hillary, Mark Twain, Tenzing Norgay, Dom Moraes, Bill Aitken and the two editors themselves. With over 50 contributors, it would be unfair to single some out at the expense of others, but a general flavour of the book can be given. 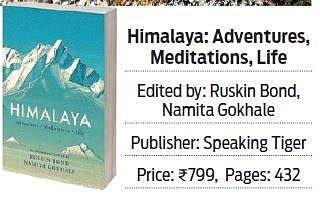 In the first section (‘Adventures’), there are accounts of espionage missions into Tibet, hair-raising mountaineering expeditions, perilous long-distant caravan journeys, which give a taste of the difficulties involved—and an indication of just how tough people were in those days, when yak, horse, mule and your own two legs were the only way to travel. The mountains can be very dangerous and there are accounts of natural disasters, which have destroyed entire villages and communities. The manner in which people survive in these conditions and take on these expeditions would make even Bear Grylls go pale.
As the abode of the Gods, the Himalayas have always been a spiritual magnet for people, who go there to find peace, salvation and maybe a bit of bhang. Some embark on what to us would seem to be crazy endeavours, like deliberately subjecting themselves to solitary confinement in rocky caves for years. Mountains in general, and the Himalayas in particular hold a power over even ordinary folk and with religion as part of the mix, people embark on tough journeys, with little expertise and equipment.

For most of us, the Himalayas are a wonderful summer getaway. But for those who live there the year round, life is hard and often very cold. The steep terrain, the temperamental weather, the cloudbursts can make life miserable at times. For those living there the ‘romance’ of the mountains is really not such a big deal. The essays in this section (‘Life’) describe experiences ranging between life in a Nainital jail and to the day-to-day life in Almora in a large joint family, and playing hide and seek with the Chinese in Tibet and the impact of avalanches roaring down the mountain slopes. Most contributions are personal accounts and so the writing style varies from essay to essay.

There are a few things I missed: There’s nothing much on the natural historic aspect—the rich flora and fauna of the region. But most of all, I missed maps. With fascinating descriptions of caravan journeys and mountain assaults, physical geography is very much a part of the deal. While it’s all very well to mention the names of places, mountains, glaciers, rivers and the routes taken, it would have been so much more useful if there were maps depicting these, so that one can get a feel of the magnitude of the journey. In all fairness, I don’t know how far this omission was due to the security paranoia we have regarding the publishing of maps of these frontier regions. There are also a smattering of typos in the text which need to be cleaned up in the next edition. This is a book you should take up to the mountains on your next visit. It’s perfect background reading and whether you’re interested in adventures, meditation or just life in the Himalayas —it’s all there.