Caught in a no woman’s land

The novel is about the tale of a female protagonist in the publishing industry.

The years just after Arundhati Roy won the Booker Prize in the late 90s, most Indian writers in English aspired for world fame. This meant that even with little talent and hardly any compelling stories to tell, most writers chose to write literary fiction. After many failures at the literary box-office, together with the growth of the publishing industry, a new group of writers emerged, those who realised that being a popular writer was not such a bad thing after all. 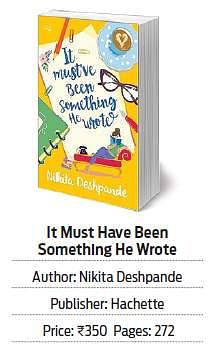 Still, the quality of popular Indian writing in English leaves much to be desired. However, Nikita Deshpande’s It Must Have Been Something He Wrote is a comforting example that popular writing in English is perhaps finally coming of age.

Set in the brave new world of Indian publishing industry, the protagonist of the novel, Ruta Adarkar, is an ambitious marketing executive, an avid reader, who comes to the publishing capital of India, Delhi, to start a career. The novel offers a frank look at the murky world of publishing, its excitements and its corruptions. Saddled with a boss who expects miracles without divine interventions, Adarkar struggles and maneuvers her way through the high drama of the publishing world where fortunes are made and destroyed.

The pressures at work are compounded as she tries to work out a balance between her personal life and working with a megalomaniac writer, Jishnu Guha, with whom she develops an interesting relationship as the novel progresses.

The novel is sleek, urbane, very with-it in its language and idiom. Deshpande’s novelistic realm comprises Twitters and Facebookers, ‘likes’ and text messages, divorces and infidelities- in short, the world of the young and the not- so- young urban Indians.

The novel is pacey, youthful and unabashed in its use of the generic advantages of popular fiction. Nikita Deshpande manages to capture the anxieties and highs of living in the new Indian metropolis. But most importantly, it gives a chilling picture of the corporate publishing industry in India.