A game of numbers beyond 22 yards

It is a mini-biography of sorts that talks about players, matches and the many memorable moments

Greatness in sports is often subject to numbers and while numbers do matter, their interpretation usually ends up depicting a post-truth of the times. This interpretation might not have any major impact on the degree of greatness of a player or the result of a particular match but it does tend to disregard the very sporting event from which the said numbers were derived. For those who believe that statistics do not present the picture, recently released Numbers Do Lie by Impact Index and former cricketer Aakash Chopra is almost godsend. 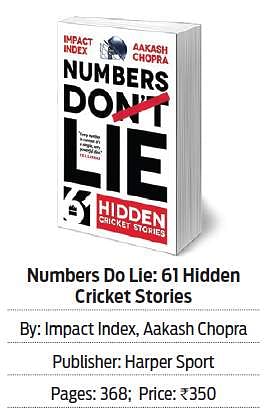 Founded by Jaideep Varma, Impact Index takes into account every cricket performance within the context of its match, the series or tournament the match was a part of, and comes up with some very interesting revelations about cricket as a sport. What is truly fascinating about the 61 hidden cricket stories that this book contains is not only how the numbers help players stack up against each other through eras but as the foreword mentions also “turn all conventional assumptions about numbers on their head.”

In a country where cricket is almost a religion and players akin to demigods, many observers still continue to look at the obvious. For us, preferences and prejudices also play a big role and, therefore, when it suits us, numbers translate into facts and when they don’t, we tend to brush off statistics as trivia. Perhaps that is why a book like this is essential to reinterpret some truths that numbers lie about. Take for instance the degree of Sachin Tendulkar’s divinity in the context of the game.

At the risk of being sacrilegious, this writer never believed that Tendulkar was indeed the God of cricket and was surprised when the book confirmed that Rahul Dravid in fact, is ‘India’s highest impact Test batsman’. Of course, this is not to say that Tendulkar is not one of the all-time greats, perhaps even the greatest when it comes to the records that he holds and the centuries he scored or the millions that he inspired by his sheer presence but the fact that two of his great impact innings were in matches that India lost, and even there he was not the leading act, speaks for itself. When compared to Dravid, who as per numbers has produced more high impact performances in critical circumstances than any other Indian player, Tendulkar has been the ‘greatest support act in the history of Test cricket’.

It’s not just the myths about Indian cricket that the book dispels but it also undoes much global folklore from the game. You would never imagine that Arjuna Ranatunga with an average of 36 would be a bigger impact player than batting legend Arvinda ‘Mad Max’ de Silva (batting average 43) and even Sanath Jayasuriya, who averages at 40 but he is! The authors also reveal that former West Indies captain Richie Richardson’s impact on Test cricket was almost as much as Vivian Richards’. In a way this book is also a mini-biography of the players it talks about in the stories and throws some googlies where you realise that Sandip Patil was India’s highest impact batsman during the 1983 World Cup, Madan Lal is India’s second highest impact one-day bowler and S Ramesh was not only a very high impact Test player but also the most consistent of the 10 Test openers India tried in 31 months.

If you have ever tried to look beyond what meets the eye in a cricket match then Numbers Do Lie will ensure that you may never see the sport quite the same way. On a personal note, this writer was happy to see the authors giving special thanks to his uncle, the late Dr Kalyan Mukherjee, and credit “his propensity to be deeply moved while looking at old cricket scorecards” as the seed that perhaps led to all this.