‘I was told a woman’s place is in the kitchen’

How did the idea of calling your new book, Three Thousand Stitches, germinate? After the success of one of my most ambitious social service projects— ending temple prostitution in Karnataka—3,000 form

How did the idea of calling your new book, Three Thousand Stitches, germinate?
After the success of one of my most ambitious social service projects— ending temple prostitution in Karnataka—3,000 former rehabilitated devadasis handcrafted a bed sheet for me with 3,000 stitches, each making a stitch to show their gratitude. 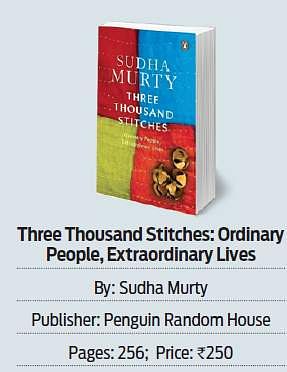 The book tells tales of your many experiences as the Chairperson of the Infosys Foundation. Which have been some of the most significant observations and some most lasting memories?
The greatest observation I’ve made is that no matter what your background, everybody gives importance to education. The universal worry remains health. A lasting memory would be from my time at BVB College of Engineering and Technology in Karnataka, where I was the only girl student. The principal concerned had informed my father about the lack of ladies’ washrooms, and how the boys around me could pose trouble. Some stared at me awkwardly; others stuck flowers in my hair. There were times when they threw paper airplanes at me that said ‘a woman’s place is in the kitchen’. I retaliated by scoring the first rank in university.

You talk extensively about prevailing biases. On an optimistic note, how far have we come in changing that, and on a more realistic note, how far do we need to go?
I see a lot of change in the way women are asserting themselves but what will really help is to make women more aware about their rights. By holding morchas (demonstrations), they should be taught how to tackle bias at work, home, institutions, in society, and during travel. This reminds me of an incident that happened to me. As I stood in the line at the Heathrow airport in London, a co-passenger referred to me as cattle class because of my simple appearance. Another voice suggested I stand in the economy class line.

Do you ever take suggestions from your husband, Narayana Murthy?
No. I like my independence. I am on the people side of things and he’s with the technology side. We allow each other complete freedom.

A little known thing about you?
I am a polyglot and can speak Marathi, Kannada, Hindi, English, Telugu, Konkani, Tamil, Odia and Gujarati.
What are you writing next?
I am working on a mythological book for children to be launched in November, around Children’s Day.