Development versus environment, the debate on which one takes precedence over the other has been going on for long. In India, the debate gained intensity after the economic liberalisation policies came into force in 1991.
The Vanishing: India’s Wildlife Crisis by Prerna Singh Bindra is yet another book that deals with this issue. And, as is the most common failing, falls into the trap of firmly entrenching itself in one camp—environment, in this case. 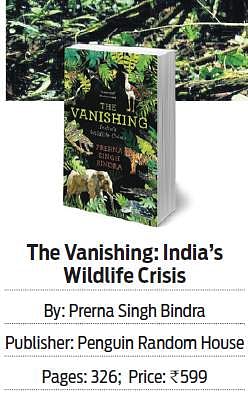 This is not to say that taking a position is not desirable. But when the arguments are purely one-sided, the element of bias creeps in, no matter how honourable the intentions of the author are.
This advocacy has to be done keeping in mind that economic advantages need to be spread equally to all corners of the country. This is where the book fails.

The author has her heart in the right place but so strong is her passion that she turns a blind eye to
any argument from the other side. So much so that not even a perfunctory attempt is made to
pick holes in the adversarial arguments.
The book would have had much more of an impact if the ‘development theories’ had been dissected painstakingly and thereon demolished. This would have lent credence to the position the author has taken and swayed the reader to her thinking.

One-sided discourse puts the book more in the realm of propaganda.
In the ‘Development versus Environment’ debate, what needs to be looked into with much seriousness is the current definition of development. Till the debate veers towards ‘Development and Environment’ and seeks to find a balance between the two, both the sides will continue to behave as adversaries and no agreeable resolution would be arrived at.

On a different front, the book needed tighter editing. The length could have been easily 30-50 pages less and, hence, the book crisper. The only thing that changes is figures and statistics that the author generously provides. In the process, after you have put the book back on the table, nothing sticks to mind.
Clearly, the book has been culled out from articles the author has written for various newspapers, magazines and websites. This is evident from the ‘Acknowledgements’ at the end of the book. As a result, chapters read as newspaper reports. And, what works as a 1,000-word article, does not particularly lend itself to a 10,000-word book chapter.