A young girl is raped & murdered, but her four friends have to carry the burden lifelong

What effect does a death have on the survivors? Is it possible to put it all behind them, or does some sort of guilt remain? The answer varies between both extremes in the real world.
In Kanae Minato’s Penance, the shockwaves of a murder reverberate for years, causing grief to everyone connected. Progressively getting darker and darker, the plot moves almost like a Greek tragedy. Not that it starts off in a happy place. 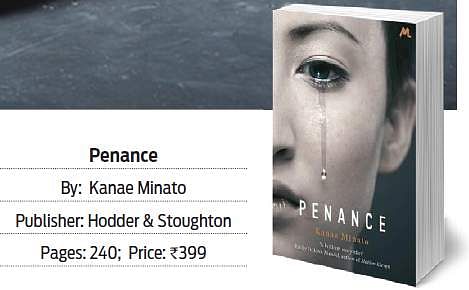 A young girl, Emily, is raped and murdered on the grounds of her school by an unknown person. With her, just before the incident, were four of her best friends, Sae, Akiko, Maki, and Yuko. All the friends were present when the stranger took Emily away, but none of them remembered what he looked like.
The murder shocked the entire community, and the girls feel guilty for not remembering. To make things worse, Emily’s mother holds them responsible for the death. She asks them to either find the murderer, or perform a penance to compensate.

The guilt preys on the friends, and as the years pass by, they are jolted off into odd trajectories: One becomes a recluse, another takes up martial arts, another refuses to let her body grow up. Through it all, Emily’s mother and her words remain in the back of their minds. Who was that mystery murderer, and was Emily a random choice?
The book is epistolary; structured as series of accounts by each of the main characters. Through these accounts, we focus on the after-effects of the murder across the years.

Interspersed through the accounts are various clues to the mystery that come together towards the end. The core of the mystery (as often is in Japanese murder mysteries) is something from the past personal lives of the characters, and is revealed in phases.
Considering the complexity of the story (five storylines converging to a theme), it is both good and bad that Penance is a short book – just over 200 pages.

Good, because it focuses purely on the plot and moves very quickly. Bad, because in a story like this, the character development is as important as the crime. It feels like a short shrift to only know the bare history of each character and not go into their mindsets in detail.
Consider that the plot stretches over almost 15 years, and that each character’s arc is taken up in barely 40 pages. That’s not enough to let us feel their life from the inside.
I’m not recommending “filler” information for the sake of it, but a somewhat more involved plot would add richness to the characters.

Did the four girls meet up after the incident? What effect did the murder have on the rest of the town? What did Emily’s mother do in the intervening years? What about the men in the families?
There are many areas that could have been explored. The ending, too, feels a bit too pat and neat due its quickness.

As it stands, however, Penance is a good quick read for fans of crime. Some websites recommend it as a YA book,
but the themes explored in the book, in my opinion, are rather extreme and dark, and I would not recommend it to that age group unreservedly.

Now we are on Telegram too. Follow us for updates
TAGS
guilt companion