Three brilliant short stories metamorphose into amazing cinema, all thanks to the writer helming the screenplay

For people who are both avid readers as well as film buffs, one common com plaint arises when films are compared with their literary counterparts: that the book was better. In many cases, this is a reflection of the fact that while reading a book, we tend to create an image in our
minds of the characters and their settings.

Too many of us who love a book also tend to acquire a somewhat puritanical zeal towards it: an adaptation, we feel, must incorporate every detail. Or if not every detail, every detail we think is important (without taking into consideration, of course, that what we think of as important may not be important to another). 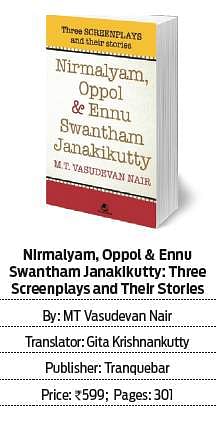 Besides this, there is the fact that books and cinema are two very different mediums. They each have their own advantages and disadvantages, their own set of expectations that are built up around them.
This is why adapting a literary work—a novel or a short story—for the screen is tricky. What to leave out of a novel, what to add to a short story: these are questions that can mean the difference between success and failure. What tends to work is a deep understanding of the ethos of a literary work, an adaptation that is able to convey adequately the core message of the story. This is where getting an author to adapt his or her own work for cinema works.

Highly acclaimed, award-winning Malayalam writer MT Vasudevan Nair’s stories have been adapted for the screen several times. In Nirmalyam, Oppol & Ennu Swantham Janakikutty: Three Screenplays and Their Stories, three of these come together. Three short stories written by Nair, each followed by the screenplay he wrote for the corresponding story at the behest of a filmmaker.

In Nirmalyam, a ‘velichappadu’ (a temple oracle) finds himself in increasingly dire straits as the religious rituals, which have been the livelihood of his family for generations, fall apart. Driven to the edge, he is forced to do things he has never done before.
In stark contrast, Oppol is a story from the perspective of a little boy who lives with his elder sister (his ‘oppol’) and their grandmother.

The adult world, seen from the eyes of the child, is a daunting place where decisions are made and events occur that impact his life.
Ennu Swantham Janakikutty, narrated by a teen girl, is about her friendship with a ‘yakshi’, a supernatural being who takes on the form of a woman but can work miracles—and wreak havoc.

As short stories, all three are memorable in their own ways: poignant, pithy, chilling, entertaining. The corresponding screenplays are equally engrossing, and the contrast between story and screenplay makes for a rewarding study in writing for cinema.
While Nair does make changes to fit the requirements of cinema (a larger cast of characters, a romance, further nuances to the plot), he stays true to the basic story. For example, Nirmalyam becomes not just the story of an impoverished oracle, but of tradition itself being displaced and dispossessed.

Oppol, similarly, shifts its focus slightly to remain not just a little boy’s view of the changing world around
him, but more: a comment on societal pressures and structures, a relationship which takes an unexpected turn, the anguish of a woman who bears the brunt of society’s double standards.
A word must also be said in praise of Gita Krishnankutty’s translation, which, by letting several Malayalam words remain in the text (with a helpful glossary at the end of the book), helps the narrative bring Kerala alive.
A fine book, and one, that should prove useful for anyone attempting to adapt a literary work for the silver screen.