Half-baked love story of the 50’s

A romance set in the vibrant era before explosion of rock and roll.

Kate Kerrigan comes highly recommended as a veteran of vintage romance and her latest novel, It Was Only Ever You is the winner of the RNA 2017 Historical Novel of the Year award.

Set in the 1950’s, this tale of amorous entanglements is about three women—Rose Hopkins, Ava Brogan and Sheila Klein—of varying degrees of likeability who play a big role in the life of Patrick Murphy, a dreamboat and songster on the brink of superstardom.

The story begins with a Holocaust orphan’s attempt to deal with pain and loss, before plunging the reader abruptly into County Mayo, Ireland, where an incredibly handsome and charismatic Patrick falls in love with an exquisite beauty (Rose) who is also sensitive, passionate, and blessed with more of the ravishing attributes that are a prerequisite for characters in these highly dramatised and overblown romantic tales. 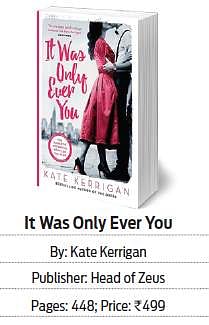 Of course, the young lovers cannot cut to a happily ever after since neither is big on brains making them all too susceptible to the manipulative machinations of those around them. Shortly after, Patrick finds himself in New York and must do his best to make it as a singer. However, love is not quite done with him and he finds himself in the maelstrom of yet another messy matter of the heart. This time, it is the fabulously wealthy Ava, who is warm, clever and nice but dealing with low self-esteem.

Tough as nails Sheila is determined to mould Patrick into achieving his great potential and ensures that his fate is tied irrevocably to her own. Rose too decides that she must do whatever it takes to reunite with her love even if it means destroying whoever stands in the way.

It Was Only Ever You does manage to engage the reader in parts and evoke the wonderfully vibrant era of dance halls and jitterbugging which preceded the explosion of rock and roll. However, after a point it gets incredibly trying, not the least because one is asked to buy that two of the protagonists are blithe, free-spirited and somewhat pure even when they come across as borderline sociopathic jerks who will do anything to get what they want. It makes it hard to root for them.

There is a lot of heavy duty, wishy-washy emotional fare to wade through. There is even a lengthy description of how finding the right, over-priced, designer dress or suit can be the sort of thing that changes your life forever because the world has no place for awkward, ugly ducklings even if they are kind, smart and too sweet for their own good.

That it is important to find the right style for you, because it is only ever about being the most attractive version of you as opposed to the best possible person you are capable of being. It is the sort of regressive, reprehensible nonsense that romance writers have long been guilty of propagating, which makes you roll your eyes and wish they would quit it already.

It Was Only Ever You limps to a laboured climax where everybody ends up in somebody’s arms: “She reached in and grabbed his hand and Patrick knew he was saved”... because in this world being single is the only unforgiveable crime. I wish I had been saved. From this tired old love story.