In a haunting, unforgettable scene from TV Varkey’s The Vanishing Generations, a man named Kunjilona enters the room where his wife lies writhing in pain, straining to deliver a baby. An almost Latin American magical realism follows: ‘…a black apparition with fangs and bulging eyes and hairy form ripped its way through the bloody discharge… Kunjilona charged in and was soon swinging a spade at the fiend. It was only after a protracted, intense struggle that he was able to subjugate the beast…’

This metaphorical struggle between a man and his stillborn child represents one of the major themes of the book: conflict. The conflict between dark and light, between pulling back and surging forward. Between progress and backwardness, life and death. 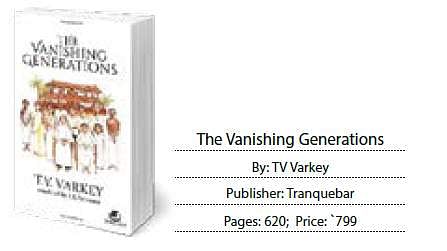 Set in a Malabar town named Kudamon, The Vanishing Generations (in its original Malayalam, Manjupokunna Thalamurakal) begins in about 1840, with the marriage of Kunjilona to the daughter of the Paalat House. This wedding is fraught with danger, because a curse that supposedly looms over Paalat House kills off any male who marries into the family—and no boys are ever born here, only girls.
However, Kunjilona changes not just the destiny of this family, but his own, and that of the town of Kudamon. Through his perseverance, his hard work, his vision and ambition, Kunjilona succeeds in bringing about changes that Kudamon could not have dreamt of.

It is not only Kunjilona, but his descendants who change Kudamon: his son, the priest Rev Kunchacko; Kunchacko’s nephew, Francis; and Francis’s son, Mathew, who becomes first a Gandhian and then a revolutionary, veering sharply to the left.

The backdrop of this sweeping saga is Malabar—as it moves from being a backward society, torn apart by casteism, illiteracy and superstition, to a more progressive land. Varkey brings each period, its problems and its progress, as deftly to life as he does the lives of the family at Paalat House.

On the one hand, the Malabar Syrian Catholic church strives to free itself of Papal authority; on the other, Kunjilona and his missionary friend, John Jackson, try to improve the lot of the Ezhavas and the other lower castes. Kunchacko carries on the fight, as do his descendants, in the process binding Kudamon to the rest of Malabar, to the rest of India, and to the world.

Against this backdrop is the story of the Paalat household: their trials and triumphs, their successes and failures. How they change and how the changing world affects them, and how they are instrumental in bringing about so many of those changes. Their relationships, their dreams, their strengths and weaknesses.

It is an ambitious book: it is not easy to bring so many elements together in a believable, readable manner. Yet TV Varkey manages to do so, and impressively. At times, the narrative does become impersonal, delving too deep and dwelling too long on the overall picture—the politics and the socio-economic scenario—but that is a minor irritant in a book that is otherwise memorable.