An antholgy that does Madras proud

Laying no claims to have covered every aspect, here is a ground plan to guide you in the city

Had I been asked to give a dedication, I would have simply said: ‘To the memory of all those who have contributed to the history of Madras.’ Of course, the introduction is more in the nature of a statutory disclaimer. It lays no claims to have covered every aspect but gives you a sort of ground plan to guide you along the way. 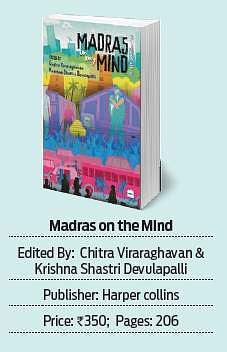 Alike most great cities, this one too is known for its history and culture, which is wrapped between the two; to take you beyond that ephemeral frontier of the past: are we in the eighth century or the 12th? But then who cares! One does not need a chronological order, so long as the stories are chatty, flow gently and do not jar like a ride through flooded and pot-holed roads.

And because these are short stories, you will find yourself jumping around in the manner of a flea in a circus from Krishna Shastri Devulapalli’s The Rice and Fall of ‘Royal’ Ramana Rao to V Ramnarayan’s Curd-rice Cricket. One thread runs through them all—nostalgia for a place once called Madras—which was above all things else, home.

Then there’s Harry MacLure’s A Passing Show, which takes you to the double heritage of Anglo-Indians. His ears jar on hearing the crude street Tamil lingo of the city as opposed to the Dravidian decorum in the words and idioms used in good old Trichinopoly.

“It was a world peopled by schoolteachers, nurses, secretaries, telephone operators, air hostesses, telegraphists, musicians, sportsmen, army men, policemen and of course, railway men. They loved their jobs and worked sincerely—and this made them stand out.”

But if you think you had that sorted out by now, wait till you meet Sentil, the tourist guide who speaks Parisian French in Priyamvada N Purushotham’s Orange, Like Firecracker Flowers on a String. He learns to ride side-saddle on a scooter with a French girl, who he meets during the course of taking tourists around the many-splendoured sights of the city.

In a place where you can safely set your thermostat to the three settings of hot, hotter, and hottest, one can succumb to the temptation of Sanobar Sultana’s House of Powders. She’s seen snow, even avalanches in Madras. It springs from the use of talcum in trying to stay fresh in perpetual humidity. As I put the book down, I found myself humming the lines of the poet who said: You may break, you may shatter the vase, if you will; But the scent of the roses will cling to it still.