Mesmerising stories in a borrowed tongue

K Sachidanandan, writing in Frontline in 2013, remarked that Indian literature in translation was “a way of having a living dialogue with our past and between our different cultures.” Emphasising that India has always had a “translating consciousness”, he further suggested that this was the primary means of creating a “sense of an Indian community of modern writers”.

While lateral translations from one Indian language to another has certainly played a major role in building this community of writers, it is translation into English that has allowed this community to emerge as a literary force for the English language reading public. 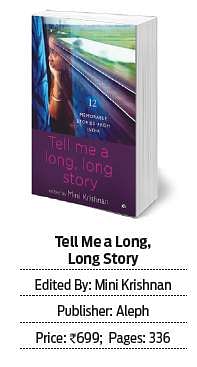 “My immense and astounding country… has a god beneath every stone,” says Mini Krishnan in her introduction to Tell Me a Long, Long Story, and therefore to capture the essence of the country and her complex psyche is to confront a “formidable challenge”.

One way of attempting that challenge is to delve into the literatures that stem from every corner of this linguistically and culturally diverse land—each corner representing a different set of worldviews, drawn in different colours and voiced in a different language.

Even half a century ago, most Indians spoke—and read—at least two languages, and were comfortable exchanging ideas across tongues. With the gradual erosion of the multilingualism that was at one time natural to Indians, these multiple ways of seeing, speaking and understanding are now available to us only in translation, and English translations have played a major role in this regard.

Mini Krishnan, as Translations Editor for Oxford University Press, has for several years been shepherding work from Indian languages into the English speaking world, and this collection makes evident that long experience with the twice-born word.

This book of carefully curated “long shorts” gives us a glimpse of 12 very different aspects of India, narrated in the distinct voices of regions as varied as Sikkim and Kerala, Kashmir and Maharashtra.
The tragedy of feudal rural Bengal unfolds in ‘Seed’, told in the unmistakable idiom of Mahashweta Devi, translated by Ipshita Chanda, while the joy and sadness of watching the making and unmaking of a bird’s nest is explored in exquisite detail in ‘Bulbuls’ by Habib Kamran, translated from the original Kashmiri by Neerja Matoo.

‘Signs’ by Nirmal Verma translated from the Hindi by Pratik Kanjilal tells us what it was like to be a young boy watching on the sidelines as the Partition swallowed up the promise of a friendship.
And of course, how can we have a book of translated stories without one by Ismat Apa? ‘Lingering Fragrance’, translated from Urdu by Tahira Naqvi, leads us through the convoluted destinies of a Nawabi family and the power play in the zenana.

The stories span geography, time, and genre, united only by their refusal to be contained into the slim frame of a short story or drawn out into the expanse of a novel, remaining, instead, somewhere in between, yet complete, and just the right length for the tales they tell. Some are long enough to be almost-novellas while others are a few hundred words over the usual short story.

For those of us who cannot directly access the rich literature of the regional languages, the collection is an entry point. One could argue about the choice of authors or the missing languages— Konkani, Gujarati or Assamese, for instance—but it is only a selection, not an anthology.

Chethan Raj Shreshta, in ‘The King’s Harvest’, the only piece in the book written originally in English, tells of the faithful Tontem, whose “story cannot be told in his words, for those words are wary and taking their last breaths, spoken now by only a scattered few who cannot find their way to a common house. So it must be recounted now in a borrowed tongue….”

All these stories made available to us in this “borrowed tongue”, as the editor notes in her introduction, change us in some essential way, even as we attempt to extract the essence of the culture they speak from, trying to make sure we do not lose anything in translation.