There isn’t a taxonomy of suffering: Karan Mahajan

Karan Mahajan, whose second book has been shortlisted for the DSC Prize for South Asian Literature 2017, speaks about the sense of impotence victims of small attacks feel

US-based author Karan Mahajan’s newest novel, The Association of Small Bombs, is a fictionalised account of the 1996 bomb blast in Delhi’s Lajpat Nagar market. The book featured on the best-books-of-the-year lists of Time, Esquire, and New York magazine, and was shortlisted for the US National Book Awards 2016.

Recently, it has been shortlisted for the DSC Prize for South Asian Literature 2017. How does that make him feel? Says the author, “I feel flattered to be listed alongside the other luminaries in the South Asian fiction firmament.”

Mahajan’s follow-up to his well-received debut, Family Planning, has garnered quite a good response. What prompted this book? Was there a particular event or inspiration behind this novel? “The book heavily fictionalises the 1996 Lajpat Nagar blast, which happened about 15 minutes from where I grew up in Delhi. But it was the 26/11 Mumbai Attack that really unlocked the memory of this relatively ‘small’ blast,” says Karan.

Once that memory was unlocked, he poured forth a novel that is sharp, pacey, and has the uncanny qualities of both prescience and retrospection. This makes you ask, is a small, soon forgotten attack in some ways even worse for the victims? “All attacks are terrible—there isn’t a taxonomy of suffering—but yes, I’m sure victims feel a greater sense of impotence when the government and the public no longer heed their suffering,” he explains. 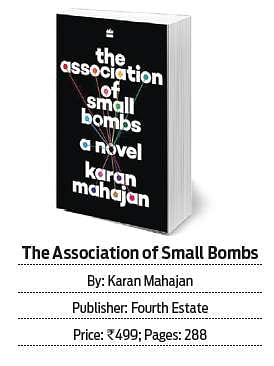 The book is a study of grief, of violence, of men from small towns, and at the same time, it is also a study of a changing India. The author makes it a point to represent all sides in the story. Why? “I wanted a complete picture of what had happened, so I could be free of it,” is his simple answer.
Pain is one of the central themes in the novel. Why? Karan has a unique answer to that: “One strange human quality is that we wish to pass on our moods to those around us. Pain is one of these states. Terrorists, in a perverse way, want others to feel their pain.”

Under the microscope here is India itself, in particular Delhi. But Mahajan’s Delhi is all dirt, pollution, and corruption. Is that what he feels about his home city? “Not, at all. I love Delhi—but it is what my characters, who have been deeply hurt by the city, feel about it,” the writer elaborates.
Many writers maintain that they research a good deal by extensive reading. Did he also fall back on research to make this book a reality? “Yes, absolutely. Reading is where the brainstorming happens. You’re literally dreaming alongside another person’s voice and mind,” he signs off with a smile.

When brothers Tushar and Nakul Khurana—two Delhi schoolboys—pick up their family’s television set from a repair shop with their friend Mansoor Ahmed one day in 1996, disaster strikes without warning. A bomb—one of the many ‘small’ ones that go off seemingly unheralded across the world—detonates in the Delhi marketplace, instantly claiming the lives of the Khurana boys. Mansoor survives, bearing the physical and psychological effects of the bomb. The book is about the effects of terrorism on victims and perpetrators.

Stay up to date on all the latest Books news with The New Indian Express App. Download now
TAGS
Karan Mahajan The Association of Small Bombs Lajpat Nagar market fiction