Nautanki, the cycle the author uses, never turns into a caricature; it gains and retains dignity throughout the journey.

Bengaluru to New Delhi on a bicycle in 22 days. On the face of it, that is what Nautanki Diaries is all about. But, it is much more than just a cycle ride across central India. It is a book which unspools like a well-made film where both the main characters—author Dominic Franks and the cycle, named ‘Nautanki’—develop as the journey unfolds.

You come to know about them bit by bit as you turn the pages. In that sense, each chapter is not just a part of the journey, it adds to the persona of the author and, believe it or not, the bicycle. 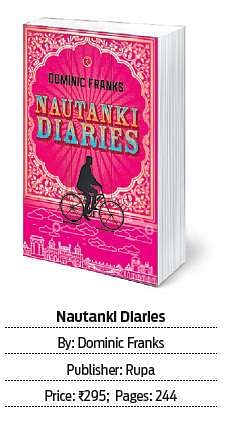 Nautanki—the doodhwala cycle, as the author describes it—is a major character in the journey; not just because it is the vehicle for the journey, but also because it has a streak of individuality. Nautanki is a living, breathing entity in the eyes of Franks, and he has been able to credibly pass on this to the reader. It has its moods—sometimes cantankerous, at times charming; sometimes tired, at times energetic. On the whole, Nautanki never turns into a caricature; it gains and retains dignity throughout the journey.

So does Franks, the rider. He seems quite clueless about what lies ahead during his journey from Bengaluru to New Delhi in time for the Opening Ceremony of the Commonwealth Games in 2010. Franks is not sure of the route; though he knows from where he will be passing through, he has little knowledge of what he could expect en route—he has suspicions too about Nautanki’s longevity.

The author puts all this through with a quirky sense of humour. Ordinary issues gain melodramatic proportions through his words while run-of-the-mill scenes turn into fascinating acts. Take for example the “Sunny Deol Temple” in Madhya Pradesh—the plain, yet-to-be-painted concrete temple where the faithful milled and where there was long queue to the sanctum sanctorum where the idol, which “should not be seen in the eye to escape from its wrath”, was ensconced.

Franks builds the expectation skilfully, throwing clues here and there by never letting the reader guess what is in store. He tells it as the scene unfolded before him and the climax is hilarious—‘Sunny Deol’ turns out to be a linguistic misunderstanding of sorts.

As an irate devotee tells him “Sunny Deol ka mandir hai, Sunny Deo ka mandir hai, Shunny Deo ka mandir hai (It’s Sunny Deol’s temple. Sunny Deo’s temple. Shunny Deo’s temple).” The lack of ear for the local dialect turns the powerful and wrathful Saturn God (Shani Dev) to the Hindi film screen action hero Sunny Deol. Equally fascinating is Frank’s description of Timbaktu, “100 km from Bengaluru”. An island of tranquillity just 3 km off the national highway in Andhra Pradesh, Timbaktu has an array of interesting characters like Babloo Ganguly (“Bengali by birth and social worker by vocation”), Vinod (hailing from “Madhya Pradesh, a witness and victim of the Latur earthquake of 1993”) and Gangamma (“the mother of all children in Timbaktu”).

The description of the failed attempt to meet badminton star Saina Nehwal in Hyderabad too falls in the ‘fascinating’ category.

The documentary crew that travels along with Franks adds to the drama of the journey. The compulsions of filming the journey clash intermittently with Franks’ endeavour to be alone on the road to retain the “purity of the trip”, the way his sports coach, HP Shivaprakash better known as Shikari, had done 28 years ago to cycle from Bengaluru to New Delhi in time for the 1982 Asiad Games. The successful completion of Nautanki’s journey is an apt end to the engrossing ‘script’ that Franks has penned. And, like all good stories, Franks has a twist right at the end of the tale!

Stay up to date on all the latest Books news with The New Indian Express App. Download now
TAGS
bicycle Nautanki Diaries