Indira for the millennials

Mrs Indira Gandhi’s birth centenary, 2017, saw a spate of books that besides re-examining one of India’s tallest political leaders also tried to reinterpret her in the context of contemporary times.

Besides being the 70th year of India’s independence from the British, 2017 was also the year where many events that shaped our present times such as the Russian Revolution and the end of the First Great War had their centenaries. Looking back these two events now appear to be a letdown in the context of the promise they made—the Bolshevik revolution assured to set everything right and the First World War was far from ‘the war to end all wars’. Unlike these, the literature that reassesses Indira Gandhi a 100 years after her birth is far more generous. 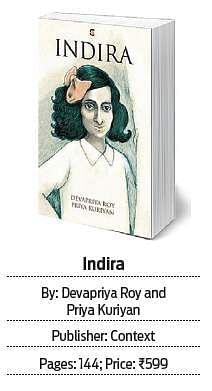 Mrs Indira Gandhi’s birth centenary, 2017, saw a spate of books that besides re-examining one of India’s tallest political leaders also tried to reinterpret her in the context of contemporary times. While some tried to reinstate her as India’s most authoritative Prime Minister, some made an effort to reclaim her all-encompassing persona. But the one that recasts her for the younger generation in a truly unique manner is Devapriya Roy and Priya Kuriyan’s graphic novel Indira.

Alternating between portions featuring Kuriyan’s illustrations that enliven Indira Gandhi using the traditional comic book style visuals and Roy’s prose that follows a young girl called Indira, who seeks to know the story of her more illustrious namesake, it seamlessly blends a century in the history of India. Although one might argue that much of it perhaps comes at a cost of leaving many things ‘Indira Gandhi’ out.

The visual medium remains one of the most potent communication formats to tell a story in India, as we tend to recall the film or television version of an event or a story more readily than the original story itself. Moreover, for the younger generation words do not matter as much as the visual representation, ergo it needs to be on ‘insta’ as opposed to a ‘traditional’ FB post.

It’s here that Roy and Kuriyan score. Roy has called this ‘graphic biography’ as the ideal tool to take ‘Indira Gandhi to millennials’. Kuriyan’s use of a particular colour to dominate specific periods in Mrs Gandhi’s life such as mustard to highlight the Nehru family’s decision to adapt to Mahatma Gandhi’s Swadeshi movement, blue for the years when young Indira learns about the trails of life, pink for her courtship and marriage (perhaps inspired by the now-famous sari she wore on her wedding day), green for the years that led to the 1971 Bangladesh War and monochrome for the Emergency adds to the overall effect.

There is no doubt that despite being a graphic novel, a genre that often gets brushed aside as ‘not the kinds to be taken seriously’, Indira is also a historical account and should be looked at as a biography. It employs a precise focus in its interpretation and rarely opts to present the ‘other’ side, which is fine as this is not that kind of a book but is one of the things that pull it down. The past often unravels itself with each moment and there are things that have now come to light about how some of Mrs Gandhi’s actions had a completely different reality than the one that was believed to be true. The question then is how much should the younger generation know and not know.

Stay up to date on all the latest Books news with The New Indian Express App. Download now
TAGS
Indira Gandhi