'Illiberal India: Gauri Lankesh and the Age of Unreason': A sharp look at India today

Woven in with the history of Gauri Lankesh’s life is the country’s history.

On September 5, 2017, journalist and activist Gauri Lankesh was shot dead at her home in Bengaluru. The assassination sparked off a wave of controversy. On the one hand, there were those—who had labelled her ‘Surpanakha’ and had hated her for her feisty stance against communalist, radical forces—who celebrated Gauri Lankesh’s death. On the other, there were those—a shrinking number?—who moaned yet another sign of the growing illiberalism of India. 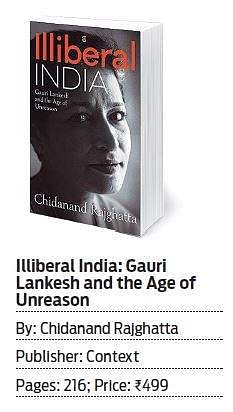 Chidanand Rajghatta, much-respected veteran journalist, once married to Gauri Lankesh and a lifelong friend of hers, pays a tribute to Lankesh in Illiberal India: Gauri Lankesh and the Age of Unreason—and this he achieves not merely by showing us who Lankesh was or what she stood for, but what India is today, why the India of the 21st century was a place that brought out all the disputatiousness of Lankesh’s nature.

Rajghatta does not make his book a biography of Lankesh. True, there are indications of the milieu she grew up in (her father, P Lankesh, a highly respected writer and filmmaker, was also the founder of Lankesh Patrike, which his daughter made her own, as Gauri Lankesh Patrike). There are reminiscences of Lankesh’s days as a student, and as a firebrand journalist in various publications. There are also a few mentions of Rajghatta’s and Lankesh’s five-year-long marriage. But woven in with that history of Gauri Lankesh’s life is the history of India’s (and particularly Karnataka’s) struggle to retain a syncretic, secular past.

In the course of the book, Rajghatta explains the bases of several of the main causes that Lankesh espoused. The origins and turbulent history of the Lingayats, for instance; or the controversy over the Baba Budan Giri shrine, which, from being a symbol of Hindu-Muslim amity (since the sage Baba Budan was revered both by Hindu and Muslim followers), has become more like an echo of the Babri Masjid-Ramjanmabhoomi tussle. He explains the way Tipu Sultan has gone from being a possible icon of the Indian freedom struggle to a contentious figure. He writes of love jihad, the Naxal problem, the sudden and frightening upsurge of mindless, brutal bigotry.

India’s politics, its media, its society, and its so-called ‘religiosity’ are not merely touched on; they form a major part of the book. Rajghatta offers insights into the disturbing nature of India today, the way extremism is becoming mainstream.

What is most striking about Illiberal India is the fine balance Rajghatta manages to retain throughout the book. The balance between India as a country and Gauri Lankesh as the subject of the book. The balance between private and public, between the fact and the analysis. He reports of Gauri Lankesh’s life and death, but with heart. He brings her alive, not just as an activist and journalist, but as a warm, affectionate, forthright and indomitable woman. A fine biography (of sorts), and a thought-provoking, unsettlingly sharp look at India today.

Now we are on Telegram too. Follow us for updates
TAGS
Biography Gauri Lankesh