When techie Vinay Kumar Sajjanar went around Indiranagar looking for Kannada poetry sessions, he found none.

BENGALURU:When techie Vinay Kumar Sajjanar went around Indiranagar looking for Kannada poetry sessions, he found none. Disheartened, he decided to start one just to see if it works. Soon, the sessions became a huge hit. This motivated him to start Kahale (meaning bugle), a platform to revive Kannada poetry and literature. 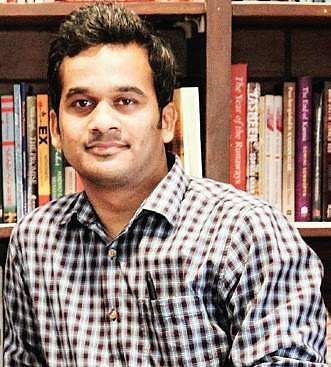 Vinay says, “I attended a few poetry sessions at Indiranagar and BTM layout. The organisers did not encourage the local language. They were allowing only Hindi and English poetry narration, and when I said I want to narrate a Kannada poem, they said I could attend the session as an audience. Such repeated incidents somehow pushed me to start Kahale, which today, has grown to be a big organisation, with thousands of members.”What binds the thousands of them is their love for the language and literature.At Kahale, one can read or narrate their poems or short stories in front of an audience, who then give them feedback.

“A literature eco-system consists of a reader, writer and publisher. To bind them together and help them understand the needs of each other so that they can bring out better content, Kahale was started,” he says.
Their first ever event, a story-telling session, which began through word-of-mouth, received 200-plus entries. Top five were chosen and as a prize.

Sawanna Publications gave away a few books to winners to encourage them. Slowly, Vinay went on to introduce open-mic poetry sessions and slam poetry in Kannada. The result: Hundreds of people expressed their interest to be a part of it.

“I was overwhelmed to receive such a warm response. Hence, on the third Saturday of every month, we started organising poetry sessions. We have done 14 poetry sessions till now,” says Vinay.“We recorded a few of them and updated them on social media. A few of those from outside Bengaluru, who saw the video, conveyed their interest in being part of it, but also expressed their inability to visit the city. Hence, we started an online platform. We told them to record a selfie video and send it to us through Facebook. Over 250 videos from five countries landed up in  our inbox,” he adds.

As the next step, Vinay, after taking inputs from senior writer and poet Jayant Kaikini, started Kahale Katte – a platform to bring together old and contemporary writers together so that they can exchange information. “New writers are unaware of the nuances of literature and Kahale Katte aims to bring them together so that contemporary writers can come up with quality content,” he says.Kahale, which has a nine-member  core team   who work on  online and off-line content, is also planning a summer camp with kids to encourage them to read  and write in Kannada.

Kahale has also brought out bookmarks featuring customised sketch of legends of cinema and literature with a line taken from their notable poems or dialogues. In-house artist Kumar is in-charge of making customised sketches of legends. Also, the bookmark comes with a QR code, and when scanned, it redirects to a list of new generation artists working towards the development of Kannada and literature. Kahale is also planning to bring out minimal posters of characters in Kannada books. “We are starting with the three main characters of Poornachandra Tejaswi’s novel Karvalo. With this, we aim to bring into life the characters of Karvalo,” Vinay says.