The common image of astronomers looking through the telescope and making momentous discoveries immediately belongs only to the movies.

The common image of astronomers looking through the telescope and making momentous discoveries immediately belongs only to the movies. In real life, astronomy comes with a huge workload of recordkeeping and patient observation. At the end of the 19th century, this workload was handled by humans, known as “computers”, and they did the calculations related to astronomical data manually. In her book The Glass Universe, Dava Sobel tells us the stories of the “computers” of Harvard Observatory, and how the observatory offered these roles to women in a before-its-time display of equal rights. 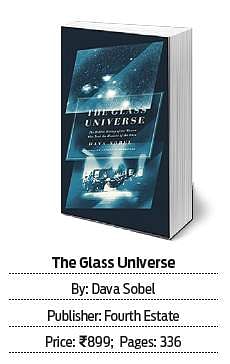 “Computers” worked with spectroscopic photographs of portions of the sky, produced on large plates of glass, to classify and track stars. The Harvard Observatory was a leader in this effort. Its programme was financed by a rich dowager named Anna Draper in memory of her scientist husband. Beginning with the commissioning of new telescopes, the project expanded to include stipends for more computers, mostly women.

Through the narrow prism of Harvard’s programme, Sobel tracks the various advances in the field of analytic astronomy. There were the so-called Fraunhofer lines—dark lines in the spectrums of stars. Were they indicators of the elemental composition of the stars? And would a combination of Fraunhofer lines and brightness be enough to group and categorise the stars?

The researchers at Harvard debated, expanded, and modified the categorisation system more than once. Then there were the so-called “variable” stars—stars that regularly changed in brightness over time. Researchers became experts in tracking and categorising these variable stars, helping in understanding of star clusters and distant novas.

And over it all, the bigger questions: how big is the universe? How far are the stars from us and each other? How fast are they moving? Are there other galaxies than ours? Sobel tracks the multiple attempts to answer these and how the evolving data from Harvard contributed to the answers.

Because the book focuses on Harvard, it tends to omit the contributions of the rest of the world, treating Harvard and the American astronomy scene as the Mecca of astronomy. As an Indian reader, the most galling of these omissions was the consistent misspelling of the astrophysicist Meghnad Saha’s name.

On the other hand, the book also underlines the infrastructural advantage that the US has enjoyed over most of the world. Progress in scientific research requires a lot of man-hours (or woman-hours in this case), but the money and equipment is critical to back it up. Harvard’s path to an exhaustive catalogue of stars is charted over more than a century in this book.

The larger question of women in research is also talked about here. While the directory of the observatory, Dr Pickering, is for having women in his laboratory and wants to give them the honours they are entitled to, society around them is uncomfortable about this switch. Even Harvard president Abbott
Lowell doesn’t like the idea much. But over the course of the century, the perception slowly changes, until the pioneering researchers from the observatory are offered doctorates, leadership positions, and awards. There is still some way to go to fix the skewed gender ratio in the sciences, but this history offers a path.
Dava Sobel has put in a huge amount of research into this book. Her style matches the 18th century correspondence that she quotes, making the book occasionally tough going, but the reader is rewarded by a panoramic view of a scientific discipline in transition on multiple fronts: civil rights, core concepts, and influence on the world.

Now we are on Telegram too. Follow us for updates
TAGS
astronomer