Paradise and its Protectors

In the little seaside village, Socorro Do Mundo, where time seems to be snoozing along with the inhabitants, the overwhelming evidence of insidious rot is impossible to overlook. 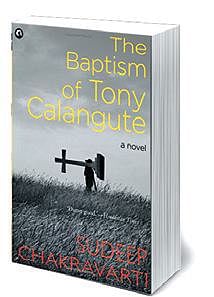 Sudeep Chakravarti’s The Baptism of Toni Calangute manages an affecting trifecta in that it is somehow harrowing, humorous and ultimately hopeful. It tells the tale, of two cousins—Toni and Dino who have taken it on themselves to serve as the protectors of their beloved Aparanta, known to the uninitiated as Goa. For long, this slice of paradise, with its treasure trove of natural resources, has proved to be an irresistible lure for rapacious conquerors and all folks greedy, corrupt, ruthless and unscrupulous with an eye for making a quick fortune both from within and without.

Toni and Dino are incensed because Aparanta is being poisoned by her own waste and excess, in thrall of those who would seek to “plough the cunt of Goa, while she lies back like a whore fuelled by ecstasy. Lies back and enjoys it even”.Even in their little seaside village, Socorro Do Mundo, where time seems to be snoozing along with the inhabitants, the overwhelming evidence of the insidious rot is impossible to overlook. The duo are sickened by the unbridled covetousness that has seen the delicate ecosystem destroyed with the overabundance of hotels, resorts, clubs, gambling, dens, men/women of pleasure and drugs.

Dino for one refuses to succumb to the hard-bitten cynicism of those realists bogged down by a sense of the inevitable. Toni is wary and weary, longing only for peace in the public and personal spheres, unwilling to take on the demands of a crumbling world. Chakravarti paints the two protagonists and all in their lives with sympathetic but unflinching strokes. There is fiery Ida, Dino’s mother and a crusader in her own right, Anastasia, Toni’s wife who uses her suffering like a scourge, and even Melba, the bane of Toni’s existence with her goats and prodigious appetite for lucre and lust.

Truly despicable characters tickle the funny bone with their ridiculous dialogues, skewed reasoning and debauched antics as evidenced by the brokering of a nefarious scheme over tandoori chicken and merry-go-round coitus. It is all very amusing until the devastation unfurls with the destructive potential of a hurricane.

Key players responsible for triggering the maelstrom include Winston Almeida with his overblown ambition and overbearing brothers, slimy PI Fernandes, his seducer, the malevolent Princess, and a Russian drug lord, Sergei Yurlov who is likely to haunt this reviewer’s nightmares for a fair bit.

There is something childlike not to mention unreal about Dino Dantas and his sincerity in fighting for a righteous if lost cause, uncaring of personal safety or the welfare of his immediate family because he is too keenly invested in the wellbeing of his people who don’t actually care for crusades while there is rice, fish curry, cashew feni, and trance to take away the edge. With his profound saga of love for one’s land, loss and longing, Chakravarti makes one ponder why it takes nothing short of unspeakable tragedy to galvanise us into doing the right thing.

The Author’s Take
Favourite word
ETD: Estimated time of departure
Reading right now
Clive of India by Nirad C Chaudhuri
Between the World and Me by Ta-Nehisi Coates
Bojro-manik Diye Gatha, an anthology of revolutionary poetry in Bengali, edited by Rahul Purakayastha
Fictional character you would like to have a drink with
Apu: Tea, to talk about how a carefree child changes to a self-pitying adult
John Yossarian: Whiskey, to laugh over Catch 22
Karna: Amrit, to discuss loyalty and abandonment
A book that you can read countless times
Any ‘Professor Shonku’ story in Bengali, by Satyajit Ray

Now we are on Telegram too. Follow us for updates
TAGS
Paradise Socorro Do Mundo