In conversation with City Express,Ram Sivasankaran talks about why he thinks Mahabharata by Vyaasa is one of his favourite books and why Hitler’s Mein Kampf should not have been written. 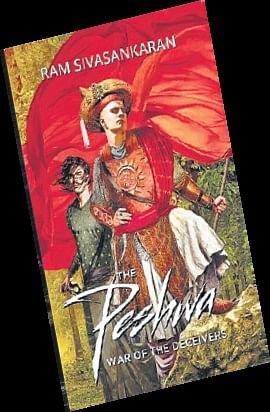 BENGALURU:Ram Sivasankaran has recently penned down the second installment of the historical saga of The Peshwa: War Of The Deceivers.Excerpts

Your favourite book of all time and why? Could you quote a passage?
It is very difficult to single out a book, but the only work that comes to mind at this time is the Mahabharata by Vyaasa. The reason is explained by the universality of the following statement about the Mahabharata, by Rishi Vaishampaayana: “This is a tale on righteousness, on the longing for material belongings, on love, on avarice, on envy and on valour. What is contained in this work may be contained elsewhere but what is not in it may not be found anywhere else.” Even now, the Mahabharata is a treatise for political science, battle strategy and diplomacy.

Your favourite fictional character and why?
My favourite fictional character from childhood is Edmond Dantes, from the Count of Monte Cristo (1844) by Alexandre Dumas. The crux of the story is the wrongdoing against a young man, whose promising career was destroyed by some envious acquaintances. How he returns to exact just but compassionate revenge on them all is a good tale to tell.

Few lines you got from a book, which you would never forget?
“The lion cannot protect himself from traps, and the fox cannot defend himself from wolves. One must, therefore, be a fox to recognise traps, and a lion to frighten wolves.” – Niccolo Machiavelli (The Prince).

Five top books released in 2017, according to you?
In no particular order these are the books from 2017 that I want to read, and, obviously, what I consider to be top books:
■ Artemis by Andy Weir
■ Leonardo Da Vinci by Walter Isaacson
■ Origin by Dan Brown
■ Remnants of a Separation by Aanchal Malhotra
■ Sita: Warrior of Mithila by Amish Tripathi

One book you would want a first edition of and why?
Kautilya’s (Chanakya)
Arthashastra because there are a lot of junk memes floating around Chanakya these days, and equally as many dubious books (granted, some are authentic renditions). Would be great to find an original.

Which author would you like to have tea with and what would you talk about?
I would want to have tea with Kalidasa. Legend says he came from very humble beginnings. I will want to discuss his rise to becoming one of the most erudite minds of his time as well as ours. Particularly, I would ask him how he invoked the grace of Goddess Kali, as legend says.

One advice you would give to your favourite author, and one to terrible writers?
A couple of my favourite writers are George R R Martin and J R R Tolkien of the Game of Thrones and Lord of the Rings. I love their attention to detail and am, myself, very inspired by it. However, my editors have often told me to keep things short so as to retain the attention span of the majority of contemporary readers. Perhaps their editors may have said the same to them too, although I would not advise such towering personalities any such thing.
As for ‘terrible writers,’ I would never use such words. Having written anything is to have created something, no matter how grotesque some people may find it. As reasonable peer reviewers, we need to back up an aspiring writer’s ambitions by offering them constructive but candid criticism.

Which books would you take with you on a solo holiday?
The whole series of Bharatiya Vidya Bhavan’s – The History and Culture of the Indian People.

Your one guilty-pleasure read?
Always, the Bhagavad Gita rendered by Shri C. Rajagopalachari. Each time one reads it or listens to discourses based on it, new perspectives are unearthed, like gems from an expansive mine.

One fictional character you go to when you need a friend?
Who better than King Vikramaditya of the Vikram-Betaal stories? The actual character may be based on a real ruler but I feel this has never been soundly established, hence I consider the character fictional. The Vikram-Betaal tales all have fascinating morals for everyday consultation.

What is one quality of a book you wish people would have?
Something that inspires everyone to work towards an aim of making the world a better place, without causing physical and emotional harm to others. One that does not disrespect peoples’ choices in life - their religious or ideological inclinations. Books should appeal to a universal audience, not strengthen the barriers that already divide us.

One book you wish was never written, and why?
Hitler’s Mein Kampf can be thought of as one such book. Besides being the autobiography of one of the most demonic minds of human history, it still forms a rallying point for modern sympathizers of the notorious National Socialist Movement.

What is one thing you cannot tolerate when you are reading?
Interruption of any kind.

Your favourite reading nook?
In bed, on a Friday night.

Singapore, Malaysia reopen border after being shut for nearly two years due to COVID