The two were married in 1933. Bedi, a Sikh, came from a feudal family who were direct descendants of the religion’s first guru.

Researching into the history of Kashmiri nationalism for his earlier work, A Mission in Kashmir, former BBC journalist Andrew Whitehead came across the mention of a white woman who, like him, was British-born. She too had studied at Oxford, married an Indian, had India-born children and was, at one time, engaged in the politics of Kashmir. However, more than these commonalities, the very different trajectory her life took, prompted him to start an investigation that led to the writing of The Lives of Freda. 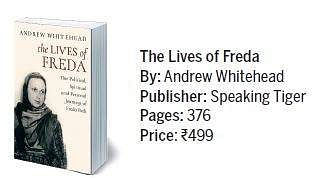 Born in 1911, in an East Midlands family of watchmakers, ‘Freda Houlston’s childhood was suffused with a sense of absence and loss’—caused by the fact that when she was five, her father went to war and never came back. The void ‘pushed Freda towards what was the defining aspect of her life, a restless personal quest which culminated almost 50 years later in her ordination as a Buddhist nun’. In Freda’s own words: ‘My destiny was to go to India.’ Meeting a fellow student at Oxford was the start point. With her politics already shaping towards communism, the romance with Baba Pyare Lal Bedi was ‘strengthened by the common causes they championed and their intellectual collaboration’. Such was the bond that it overcame barriers of race, colour, class and religion, as well as irritants such as family disapproval and disciplinary action taken by the university.

The two were married in 1933. Bedi, a Sikh, came from a feudal family who were direct descendants of the religion’s first guru. Yet, meeting her mother-in-law for the first time, Freda was immediately made to feel at home. Though the warmth of the welcome made it easier for her to immerse in her marital family’s culture, a predisposition to embrace new challenges seems to have been characteristic of her nature. The narrative traces Freda’s days in Lahore as a lecturer in English at a women’s college, her forays into publishing, journalism, and the active role played in the civil disobedience movement, including serving a jail sentence. Partition brought a move to Kashmir where the Bedis were part of Sheikh Abdullah’s circle.
While Bedi drafted the ‘New Kashmir’ manifesto, Freda maintained contact with underground left-wing nationalists, joined a women’s militia for the defence of Srinagar and revived her teaching career. In the 50’s came a new assignment, a six months United Nations posting to Burma with the brief of planning the newly independent nation’s social services.

The stint exposed Freda to Buddhism and paved the way for the key role played in the rehabilitation and resettlement of Tibetan refugees in the early 60’s. It also marked the commencement of a spiritual journey that culminated in her becoming the first western woman ever to receive full ordination as a Tibetan Buddhist nun.

The early 20th century was still a time when idealism was respected among one’s educated peers, not scorned. In the context of India’s independence movement, we’ve heard of Annie Besant and Madeleine Slade (Meerabehn), but few know of Freda Bedi. This well-written, extensively researched work—interviews with friends and family (including her son Kabir Bedi, the actor), combined with the scrutiny of correspondence, tape recordings, newspaper archives—makes for an insightful, riveting tale of a life extraordinaire.

Now we are on Telegram too. Follow us for updates
TAGS
The lives of Freda Andrew Whitehead