A brave imagination of Bangladesh

One can see why this qualifying statement is needed and why it took Choudhury 15 years to complete the work.

Bangladesh, a country known for natural disasters, overcrowding, poverty and a perennial fight between secularism and Islamism, is the setting of Numair Atif Choudhury’s debut novel Babu Bangladesh!. It opens in 2028, five years after the mysterious disappearance of its hero, Babu Abdul Majumdar, a legendary figure, mystic and eco-activist, who rises to political prominence, courts controversy and disappears—under suspicion of stealing government funds. Presented as an account by an unnamed biographer, it patches together, via interviews, journal jottings, hearsay and guesswork, the life history of this elusive character. Says the biographer, as a disclaimer, ‘The Babu story is especially difficult to pin down due to the fact that kingmakers have done a good job of hiding the goods on him.’ 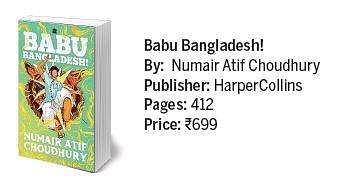 One can see why this qualifying statement is needed and why it took Choudhury 15 years to complete the work. Labyrinthine in structure, encyclopaedic in range, this roman-a-clef is styled along epic lines, of tales within tales, some leading nowhere. It juggles with shifting viewpoints and with multiple disciplines: anthropology, history, politics, architecture and geomancy, ecology and biodiversity, mythology and folklore. As if this weren’t complicated enough, the biographer frequently intrudes by opining thus: ‘In its element, this is a story that is as indecisive, capricious and shilly-shally as water,’ and ‘things unpredictably drift, with no certain sway, but turn, darken and thicken.’ Satire, fantasy and magical burlesque (a thousand-eyed bird, fish-humanoids) are the thickening agents. All par for the course in this age of fake news.

It is divided into five sections, ‘Building, ‘ Tree’, ‘Snake’, ‘Island’ and ‘Bird’, each presenting a motif in the twin developing biographies —of Babu and Bangladesh. The first, mapping Babu’s early years, tells the story of the Jatiya Sangsad Bhaban, the Bangladeshi Parliament, designed by the world-famous postmodernist Louis I Kahn. While the syncretism of faiths across the subcontinent inspired him to create a marvel that would be a ‘world within a world’, it was, ironically, the nation’s founder-president Sheikh Mujib who abandoned usage of the secular Bangladeshi salutation ‘Joy Bangla’ in favour of the Islamic ‘Khoda Hafiz’. Going a step further, his successor, Ziaur Rahman, expunged the founding principle of ‘secularism’ from the Constitution. Babu, conceived from the union of two freedom fighters in the civil war, grew up fascinated by the building and uncovered ‘eerie legends that gummed the legislatorial grounds’. For instance, he learned from two ‘mystagogues’ that the Sangsad Bhaban was located at a rare intersection of ‘cosmic’ influences, leading him to study shamanic practices the world over.

The next section revolves around a giant ficus in the heart of Dhaka University. It was from this spot that the student wing of the Bengali resistance was spearheaded. The chapters describe Operation Searchlight, conducted under President Yahya Khan’s infamous directive: ‘Kill all three million of them, the rest will eat out of our hands’. Whether that quota was reached will never be known, but the story of the felling of the giant tree in March 1971 is narrated. As is, that of the carnage that preceded the birth of Bangladesh. In its aftermath, there was a search for the 2,00,000-4,00,000 Bengali women who were raped by soldiers over the nine-month war. They were found in deserted military barracks, ‘fully naked in their quarters. They had been living like this for months, to discourage escape. Some women clutched their hair to their faces (many had become bald as a result of what had been done to them) as they privately retreated to distant and inaccessible places.’

In the spate of anecdotes, real and surreal, Babu’s own trajectory in the political landscape of Bangladesh, is dealt with, rather disjointedly, in the remainder of the work. Typically, nothing is clearly worked out. Comments the narrator, ‘In half light, the uncanny is free to leap.’ This story, then, is that wild leap of a brave imagination.

Now we are on Telegram too. Follow us for updates
TAGS
Bangladesh