There was a need to create a multi-tasking setting that intertwines technology, culture, education and work. So, we revamped the existing interiors and made minor corrective changes in the exteriors.

Manit Rastogi, Founding Partner, Morphogenesis: Over the years, research has become digitised and the space British Council had, was no longer fulfilling its original purpose.

There was a need to create a multi-tasking setting that intertwines technology, culture, education and work. So, we revamped the existing interiors and made minor corrective changes in the exteriors.

Originally, the hall area on the ground floor was divided into three portions — the circular area in the centre, and there were two more spaces on the left and right side. Now, we have combined the whole area to convert it into a big hall.

Earlier, there was a staircase in the hall on the right, and as per the changes, we have camouflaged the stairs using a wall.

Inspired from their logo, the colour palette was mostly kept white on the ground level, but we have added accents of blue on other levels.

White Makrana stone has been used for the floor. The idea was keep the focus on the art and not the walls.

Lighting was done using LEDs by Endo in different shapes and sizes, and sensors have been put in place to optimise their usage.

They turn on and off as people enter and leave the space. The purpose of more lighting was to highlight the artwork in the café. 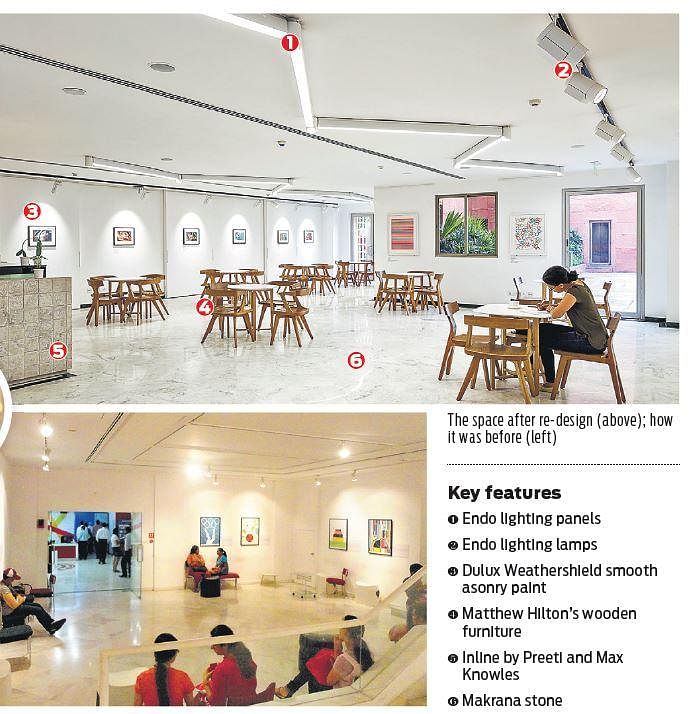 To give them a provision of partition, we have installed a sliding door, which goes inside the wall. If there are two shows happening and they require a small space and a big space, it can be used to create a partition.

But they haven’t used this wall ever because the whole thing has come out really well.

BC has a lot of art and promotional events happening. And this space is prominently used as a public area, apart from the library on the first floor.

It’s a multi-functional area that can be used in different ways during different time of the year — exam time, seminars, admission time, and art expos or as a prefoyer to the 180-seat auditorium that is on the same floor.

They wanted to make maximum usage of the ground floor. So, we even shifted the cafeteria from outside to the hall.

A counter has been created using reclaimed wood from the site. The old wood has been cut horizontally to create the front and sides of the cabinet.

The wood furniture designed by British designer Matthew Hilton has been placed in the hall.
The project was viewed through the lens of adaptive reuse, where the original design story that carries the large Banyan Tree mural by Howard Hodgkin on the exterior remained intact.