No book I have read in the recent past has affected me as deeply.

The plan was to begin this review with a quote from the book A Stranger Truth: Lessons in Love, Leadership and Courage from India’s Sex Workers, for context and as a foretaste. The editor who resides in me chose to scrap it because it contains a string of female anatomical terms—scientific, mind you—yet something even I am pre-set to reject.

When the author took up the reins of the Bill & Melinda Gates Foundation’s programme to stem the growth of the HIV epidemic in India perhaps everything was stacked against him. No barrier as deep as India’s instinctive shying away from discussions around the body, physiology and sex on one hand vis-a-vis the abject lack of warning, resource or mechanism from traditional wisdoms in rural or unlettered milieus to comprehend the AIDS epidemic at real, grassroots level. 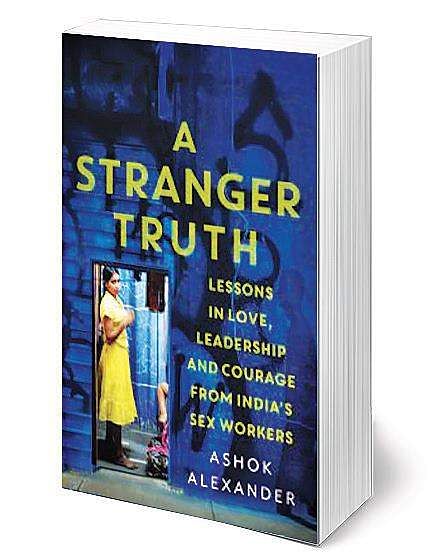 No book I have read in the recent past has affected me as deeply. Each of us read for different reasons and I read to learn from those who have learned the hard way. This is a chronicle of a man who, perhaps foolhardily, stepped into the impenetrable with no preparation and emerged from that maze to record Indian resilience at its finest.

Through conversations with hookers, kothewalis, housewives who double as sex workers, intravenous drug users and extremists, Ashok Alexander has gone into impossible territory to engage with the underbelly urban India shies away from. The part that made me put the book down to sob uncontrollably came early on. In this scene the author is at a tony dinner with friends in Delhi and is prompted to discuss his new line of work. Kamla from Medak 18 and abandoned, had gone to the outskirts with her tiny kids to service a client which was a trap to lure her into a gang-rape situation. Throughout the horror and the beatings, she worried constantly about her children even begging the brutes to permit her a break to see to them.

A couple of hours into that harrowing ordeal, her babies had fallen asleep in each other’s arms and all she felt was thankful they were safe. The vast gulf between the Indian sex worker’s family and the empowered guests at that dinner emphasises the realities of India as a society of schisms.

The book operates on three tiers, each beautifully executed. Tier 1 details rather simply the bare bones of Alexander’s journey from McKinsey into the chaos of an unstructured project which was then moulded into Avahan, recording the challenges and the milestones. What elevates this is the next tier, I call ‘postcards’—snapshots from poignant or light bulb moments of real life experiences with sex workers, injecting drug users and NGO partners.

Each anecdote shimmers in its retelling, with brilliant turns of phrase and the deft touches of an expert. The introspection that highlights the third tier sets it apart from comparable works of nonfiction via analysis, drawing management and life lessons from a murky world far from all we know. The narrative flits between these levels with consummate ease until they mesh together into a layered story relayed with startling vividness, holding a mirror up to our moral values and us.

“No one has shared a coffee with me before from the same cup. Even my family wouldn’t do that—how do you do that?” The marginalisation of the Indian sex worker is systemic and brutal. S/he could be the perfect fodder for a deadly disease like AIDS.

It took extraordinary intervention to prevent this decimation. Of the UN’s Millennium Development Goals, HIV was one of the only two health conditions where India had met targets in 2015. And we are afforded a privileged peek into the processes and systems that enabled this triumph.What the book leaves the reader with are multitudes of stories of heroism, humanity, hardships and healing conveyed transparently, without judgement and with great love.