The book draws upon a range of sources as diverse as the banned material itself, legal judgments, legislative debates, memoirs and biographies, contemporary newspaper reports and letters to editors.

NEW DELHI: A new book looks at state censorship in India in the transition period from colonial to national rule, when historical actors behaved in unpredictable ways.

War over Words: Censorship in India, 1930-1960 by Devika Sethi, who teaches modern Indian history at IIT-Mandi, explores the diverse mechanisms and motivations for censorship and its role in the shaping of the modern Indian republic.

The author says that a study of censorship in any historical context that restricts itself to the rarefied level of law, policy-making and implementation alone tells only half the story. 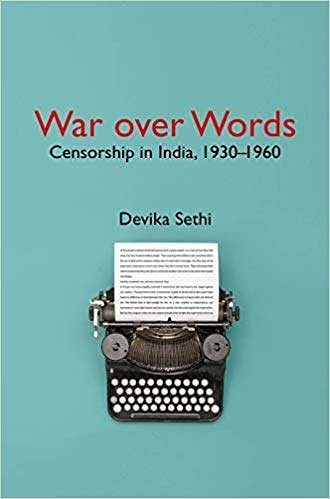 So it is important to examine the issue from the viewpoint of not the state alone but of that abstract yet vitally important constituency, the public.

Using a varied palette of official and non-official sources, the book seeks to provide a three-dimensional model of how censorship of publications was envisaged, implemented and received in India over three crucial decades in her history.

The book, published by Cambridge University Press, examines state censorship beyond the conventional boundaries that circumscribe it in the existing literature.

This has been attempted in two directions.

First, the boundary of race is complicated in a colonial context by focusing on works by non-Indian authors.

Second, Indian independence is treated not as a dead-end but as an open door that permits comparison of both policies and people's reactions to them.

The book draws upon a range of sources as diverse as the banned material itself, legal judgments, legislative debates, memoirs and biographies, contemporary newspaper reports and letters to editors, government papers and reports, first-person accounts, and empirical and theoretical works by scholars of censorship across the world.

The book is divided into four parts -

Guarding the State, Protecting the Public: Censorship Policies and Practices in the 1930s;

Censorship in India during the Second World War;

and The Censored Turn Censors: Freedom and Free Speech.

According to Sethi, the overwhelming concern of the colonial state with public opinion meant that censorship was carried out not only to proscribe or ban publications but also as a means of exercising surveillance over what was being written and debated in the public sphere.

She says, the drive to censor, or to bring about censorship is a powerful one.

In contemporary newspaper articles in the Indian press lamenting or railing against bans from the colonial period that were not lifted by the post-colonial state, the names of certain books appear with regularity, she says.

Censorship in colonial India, Sethi says, was not entirely colonial. In other words, there was nothing peculiarly colonial about the desire to censor publications. The censored of one generation are often the censors of the next.

Now we are on Telegram too. Follow us for updates
TAGS
War over Words Censorship in India Devika Sethi