If fiction is a reflection of society, stories about the powerless and the mute show you its true face.

If fiction is a reflection of society, stories about the powerless and the mute show you its true face. In man’s unending quest for domination, who is more powerless than animals? Sumana Roy holds up a mirror to Indian society in Animalia Indica, by editing together a collection of excellent animal stories from the country.

The various pieces cover a plethora of emotions. We start with perhaps the most well-known and loved animal story in English set in India: Rikki-Tikki-Tavi by Rudyard Kipling. Even today, the sheer energy of the work stands out. And then we have a Hindi classic: A Tale of Two Bullocks by Premchand. 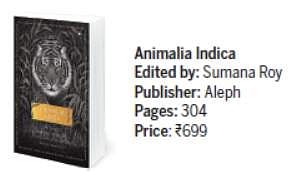 The delightful translation by Rohit Manchanda really brings out the flavour of the original here. For its joie de vivre, I’d next bring up the excerpt from Nilanjana Roy’s The Wildings, starring the stray and wild animals that live in Delhi’s Nizamuddin area. When things go badly, it is the animals that suffer the most. Mahesh by Sarat Chandra Chattopadhyay is about a farmer’s bullock suffering the effects of famine and caste discrimination. Jumman by Shripad Pendse talks about a goat that becomes a foster son for a lonely man, only to become the target of a village’s superstition and rituals.

In RR Borade’s Labour, a pregnant cow struggles to give birth in the midst of a storm. In Thakazhi Sivsankara Pillai’s The Flood, a dog is abandoned on the roof of a hut, while the humans make their escape.

And then there are the pieces that use animals as the “straight man” in a human comedy. The Mark of Vishnu by Khushwant Singh has a snake behaving like a snake while he’s alternately worshipped, feared, and attacked. George Orwell’s Shooting an Elephant reveals how the expectations of the “natives” influence the colonisers in showing off their bravado. Elephant at Sea by Kanishk Tharoor chronicles the drama behind an elephant’s journey to a foreign land. Syed Muhammad Ashraf’s And Then Laughed the Hyena is an excellent, creepy, chronicle of a family in a communally charged society.

The anthology’s scope is even broader than the above paragraphs suggest—some of the best stories, not yet listed here, are impossible to place in a category. The wonderful thing about Sumana Roy’s choices is that one cannot label the collection thematically. The languages of the contributions, befitting an Indian anthology, are a good mix of English and other Indian languages. The emotional range is vast, as is the variety in settings. The list of writers is a virtual who’s who of Indian writing.

If one needs to quibble, it is only to say that folktales and religious stories haven’t been covered enough. Well, one could potentially point to Vikram Seth’s adaptation-in-rhyme of The Crocodile and the Monkey included here. But the vast collections of traditional tales from every Indian language are likely to overwhelm the collection with sheer quantity and variety. And it’s just as well this is a collection with a relatively modern focus.

Special mention needs to be made of the excellent illustrations by Rohan Dahotre that preface each story and set the mood. This is a book worthy of being read, gifted and collected. And while you read, you need
to remember: these stories cannot but be biased towards humans. After all, they were written by them.