Where the past is another country

Kashmir has a recorded history of over 5,000 years, and yet everything seems to be viewed in the light of what happened in the last six decades

Reading Ashok Dhar’s Kashmir As I See It: From Within and Afar, which could be best described as a juxtaposition between a heartfelt memoir and a detailed political treatise, one is forced to look at time in a new light. Besides offering a glimpse into the history of Kashmir both from a personal as well as sociopolitical perspective, Dhar’s narrative is strung together by time in different forms. The book is a series of stories about people and problems told through a past, which despite refusing to let go is also forgotten depending on where you see it from, a future that seems lost in the annals of a whole lot of
‘what ifs’ or a present where everyone wants to live up to their definition of ‘Kashmiriyat’ but don’t know how. 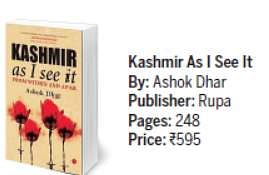 Kashmir has a recorded history of over 5,000 years, and yet everything seems to be viewed in the light of what happened in the last six decades. Unfair as it may be, nearly everyone has forgotten what it meant to be a Kashmiri. It’s here that Dhar offers much-needed insight. As someone born and brought up in Kashmir, Dhar is the insider who can give a firsthand understanding of all things Kashmir and thanks to his travels across the world—Dhar worked for over 35 years in the Energy sector—he also can see the ‘issue’ as an outsider.

As any personal account that witnessed the narrator driven out of their land, Kashmir As I See It is seeped in the memories of a time where things were different. While Dhar offers great discernment into the complexity of Kashmir in terms of its history and the rulers the land had, his lens of viewing Kashmir and its people that include Hindu Pandits such as himself, the Muslims, the Sikhs, and the Dogras cannot help but appear too burdened by the past. Dhar talks about the community of people who inhabited Kashmir and places them as someone unique and singular. Yet the troubles that plague the Valley originated from within these people who, according to Dhar, now must come together to shape their “destiny by leveraging this legacy of composite culture to prepare the ground for a happy, safe and prosperous pathway” for future generations.

Dhar nattily encapsulates the chequered history of Kashmir into a few pages, which give an excellent overview. Early on in the book, Dhar quotes Walter Roper Lawrence from his 1895 book The Valley Of Kashmir—the Kashmiri is what his rulers have made him—and this seems to be the driver for most of what defines Kashmiri. The much-layered narrative, the anecdotes et al seem too romanticised when seen in the light of Kashmir’s present-day reality that stares us in the face. Dhar’s prose celebrates stalwarts such as Sheikh Abdullah, Zulfikar Ali Bhutto and bureaucrats such as TN Kaul and PN Dhar, who, as per Dhar, if not for his heart attack could have ‘prevailed’ on Indira Gandhi to refuse to return over 5,000 square miles and 92,000 POWs unless Pakistan agreed to a final, peaceful settlement of Kashmir during the Shimla Agreement.

Dhar’s lament, his insight into Kashmir and his eloquent writing notwithstanding, some of his arguments do not make much sense. While talking about various solutions through the course of the book, he ponders what if “Article 370 is made a special permanent feature of the Indian Constitution?” Or if the Indira-Sheikh Accord could become “the real Magna Carta for preservation of autonomy of the state if the Government of India were to announce a time-bound commitment to implement the same in letter and spirit?”

Intriguingly enough, in his entire discourse where he also offers management school-like decisions to solve the Kashmir problem, Dhar never once mentions the term ‘Pakistan-sponsored terrorism’, the one element that changes every discussion about Kashmir. It is also a significant reason why Dhar could not visit Kashmir for nearly 20 years between 1989 and 2009, a period that began with the mass exodus of Pandits from Kashmir and witnessed the worst of militancy and insurgency. Dhar’s fascination with how things once were, makes you wonder if the past, as someone once mentioned, was indeed a foreign country where things are done differently?

Now we are on Telegram too. Follow us for updates
TAGS
Ashok Dhar