Online sessions with your favourite authors during COVID-19 lockdown

The live format allows the readers to have a quick and direct interaction with their favourite authors.

Books always give you a sense of relief in difficult circumstances. In this lockdown, the JCB Prize for Literature has unveiled a series of talks by influential authors under the title #TheJCBPrizeCatchUp. The sessions will go live at 6:00pm as listed on JCB’s Instagram page @thejcbprize.

Mita Kapur, Literary Director, the JCB Prize for Literature, says, “We are all looking inwards and finding ways to centre ourselves. Reading, listening to stories are our ways to venture out into the world and it really works for the times we are in. The CatchUp series by the JCB Prize connects you with our authors and takes you into their spaces, their minds and what is keeping their creativity ticking.”

Two talks, each by Shubhangi Swarup and Benyamin have already been broadcasted on JCB’s Instagram channel, the source point for all the talks, the forthcoming sessions will by taken over by Amitabha Bagchi, Arunava Sinha, Chandrahas Choudhury, Mukta Sathe, Vivek Shanbhag and Roshan Ali. 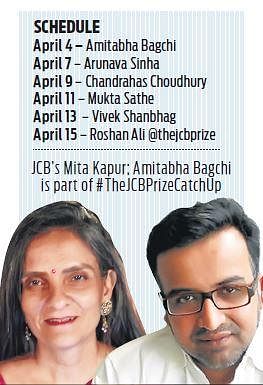 According to Amitabha Bagchi, who recently won DSC Prize $25,000 for his latest book – Half The Night Is Gone, says, “The reader-writer relationship is one of the most profound relationships that two strangers can share. In these times of fear and anxiety, it is important that we reach out and realise this connection. I am happy that the JCB Prize has taken the initiative to make it happen.”

The live format allows the readers to have a quick and direct interaction with their favourite authors.

Arunava Sinha, whose session is planned on April 7, will be recommending five to six translation works to his audience. He informs that his two book launches are stalled due to the lockdown.

“The translated version of Taslima Nasreen’s Shameless was supposed to be launched on April 15 by HarperCollins Publishers and Aleph Book Company too was to bring out the translation of A Ballad of Remittent Fever, a novel by Ashoke Mukhopadhyay.

The latter is  fit for the current times and is about four generations of doctors who tackle deadly diseases in Bengal. The copies are in Aleph’s warehouse, but there is no distribution right now and as everything happened very fast so they couldn’t put a Kindle edition out,” he says.The author hasn’t been able to give more time to reading and writing endeavours lately.

“I hate to say this but this may be the new normal and one has to settle down for this instead of agonising over it,” he adds.

Now we are on Telegram too. Follow us for updates
TAGS
COVID 19 coronavirus